Every August 5, white rose petals are dropped from the heights of the Basilica of St. Mary Major.

In Rome, the Basilica of Santa Maria Maggiore (St. Mary Major) sits atop the highest of Rome’s seven hills, the Esquiline.

On August 5 each year, at the conclusion of the Solemn Mass at the Basilica of St. Mary Major, a shower of white rose petals falls from the dome of the Chapel of Our Lady where the image is kept. At sunset on the same day, another staged “snowfall” is released in the square outside the basilica.

A miracle of snow from Our Lady

These traditions are owed to the church’s interesting history and ancient name.

According to the ancient tradition, a Roman patrician named John prayed to the Blessed Mother so that she would show him how to bequeath his wealth. She appeared to him and said that she wished to have a church built in her honor and she would give a sign in snow.

Indeed, on August 5 it snowed on the Esquiline Hill – a miracle that anyone who has been to the scorching Eternal City during the summer would acknowledge.

Today the Basilica of St. Mary of the Angels is one of the four major basilicas of Rome, and of Christendom. With its coffered ceiling, Cosmatesque floors, mosaics, frescoes and sculptures, St. Mary’s has the feel of the other major basilicas in Rome including that of St. John Lateran and St. Paul Outside the Walls.

It boasts a number of important artefacts and relics. Over the side altar in the left transept, is a beautiful golden bas relief depicting the story of the Snows.

One of the most famous relics is beneath the high altar in the Crypt of the Nativity or the Bethlehem Crypt – a crystal reliquary containing wood said to be from the Christ’s manger in Bethlehem.

Perhaps the most famous image is the Byzantine icon known as the “Salus Populi Romani” (Health, or Salvation, of the Roman People). Conserved within the Borghese (Pauline) Chapel in the Basilica of Saint Mary Major, it is an ancient devotional image.

Another important relic is the skull of St. Pancras. He was a 14-year-old orphan who had converted to Christianity. After being brought to Rome by his uncle, St. Dionysius, he was martyred along with St. Nereus, St. Achilleus, and St. Domitilla around 304 for the crime of not renouncing Christianity.

There are two popes entombed in St. Mary Major: Pope Sixtus V and Pope Saint Pius V. There are also relics of St. Jerome, a Doctor of the Church.

Another place of interest is the altar in the Chapel of Pope Sixtus. Here, St. Ignatius of Loyola, the founder of the Jesuits, celebrated his first Mass on Christmas Eve, 1538. 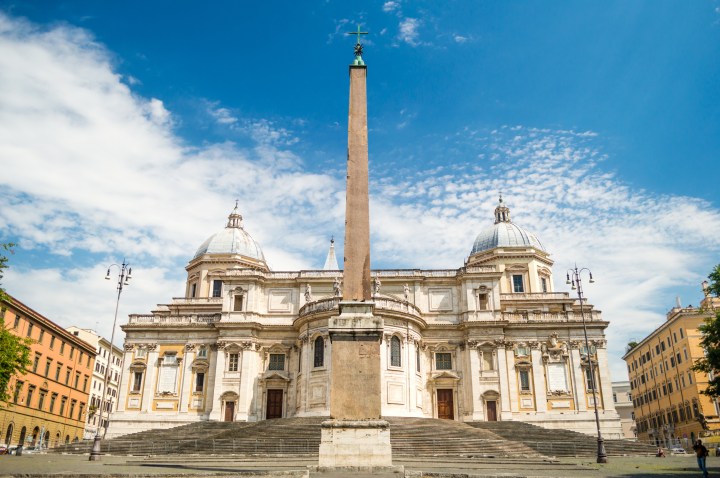