If you see an empty chair on the sidewalk, you may want to sit down

A young man has created a global movement to get people off their screens and talking face to face.

Whoever says that media and social networks have created a single global conversation isn’t familiar with the insights of Adrià Ballester. This young man from Barcelona is dedicated to talking face to face. He places two chairs in the street, sits in one of them, and puts up a sign inviting anyone who wants to sit down and chat for free.

Adrià does this because he has realized that there are many people who have no one to talk to, even if they live surrounded by other people—on the subway, in their apartment building’s stairwell, or in the street. A crowd doesn’t guarantee interaction or conversation—and conversation is essential, even vital.

So in 2017, this 28-year-old man undertook something that today has become The Free Conversations Movement. He does it to combat the “process of dehumanization and isolation” of “a social system that breaks the basic personal human connection and replaces it with an illusion of global hyperconnectivity, often misleading,” as he explains in his manifesto. He believes that this kind of communication between people of varying beliefs, ages, etc., will help us “to grow in humanity.”

The birth of this organization wasn’t initially something he planned. But since he started, Adrià has been followed in his initiative by other people at the most diverse points of the planet, ranging from Mexico City to Hong Kong, from Toronto to Ecuador, where a young woman coordinates the “conversationalists” of Latin America. In Spain, there are other “conversationalists” in Barcelona and Galicia.

You can see here some images of The Free Conversations: 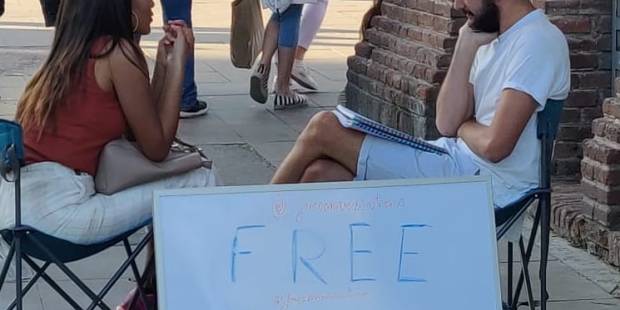 Each volunteer, 10 conversations per week

It’s now a growing, established non-profit organization. It has a volunteer from France who’s in charge of marketing, another who does the graphic design for the website … Adrià pays for the maintenance of the website with his own money; it’s worth the expense, because this is a permanent way of increasing the number of “conversationalists.”

“It touches your heart”

Gaal Cohen, for example, who lives in Guadalajara, Mexico, read an article in “La Vanguardia” in 2019 and joined The Free Conversations Movement. He dedicates Friday mornings to this initiative.

A Barcelona newspaper wrote a report about him last June, and Gaal explained what gives meaning to this project: “Those of us who volunteer both give and receive; it touches your heart.” In his case, the Guadalajara City Council is aware of this adventure and supports it.

A remedy for many

Visiting the elderly and people who are alone in retirement homes or nursing homes is difficult in times of pandemic because of the security measures taken in these places. But the street can be a meeting place in the open air, with a safe distance but closeness of heart. That’s the greatest gift and the best medicine for many people who are suffering from loneliness.

Adrià’s idea is also a reflection on how we can improve our society. Everything can start by establishing ties with our neighbors: a greeting, showing real concern for others, a generous gesture thanks to which another person discovers that he or she exists for others.

Read more:This grandma started a global ministry to honor Our Lady and bring kids back to Church
Read more:10 New ministries you should know about
Tags:
Mental Health
Support Aleteia!