The city of Rieti, in Italy’s Lazio region (just over an hour’s drive from Rome), is one of Italy’s best kept secrets. With a population of 45,000, it is a delightful town known for history, culture, and a strong papal and Franciscan traditions.

Rieti is a delightful town to visit, as it lies in the fertile Reatine plains with hills and mountains as a backdrop. The nearby 2,215 meter-high (7,250 feet) Mt. Terminillo seems to stand guard over the city.

Rieti traces its roots to ancient times. For the Etruscans, Sabines, and Romans, its location in the center of Italy rendered it an important vantage point along the storied road, the Via Salaria. The “Salt Way” (in English) traversed Italy from the shallow Adriatic Sea, where salt was mined, to Rome on the other side of the peninsula.

Just off Via Roma is the square, Piazza San Rufo, also known as Piazza Centro d’Italia (Center of Italy). A plaque on the wall describes how an ancient Roman calculated “the plains of Rieti” as the geographic center of peninsular Italy in both east-west and north-south directions.

Read more:Here’s what you need to know about the Franciscans

A city for pilgrims

For pilgrims, the city doesn’t disappoint. The Church of San Francesco (St. Francis) sits on the banks of the Velino River. In medieval times, it was the site of a leper hospital, so the friars established their community and church nearby to serve them. Though in disrepair, it boasts frescoes from the school of Giotto.

In the upper area of Rieti, just off the main square, is the majestic Cathedral of Santa Maria Assunta. The cathedral is a minor basilica and is listed as a national monument. The interior, decorated in the Baroque era, is in the form of a Latin cross, with three naves, a transept, and a deep apse.

Just beyond the cathedral is the Papal Palace where at least five popes resided in the thirteenth century. One of those popes was Pope Honorius III, who was instrumental in the life of Francis as he approved the Franciscan Rule.

The sanctuaries – all a short drive from Rieti – are Poggio Bustone, La Foresta, Fonte Colombo, and Greccio. St. Francis came here and stayed at each one.

In Poggio Bustone, Francis experienced his redemption in a profound way; in La Foresta, he recovered from an eye operation which took place in Rieti; in Fonte Colombo, he wrote his rule that was approved by Pope Honorius; in Greccio, he reenacted the Nativity of Christ in what became the first creche and changed the way the Christian world celebrated Christmas.

For pilgrims visiting Rome, Rieti can be easily accessed via public or private transportation. It merits at least a day’s visit. 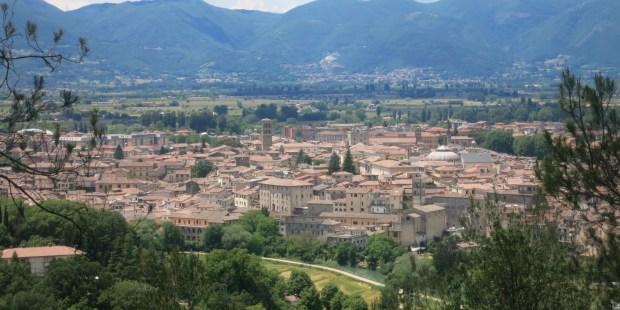