Exclusive photos: Meet Padre Pio and the place he lived

The interior of the convent in San Giovanni Rotondo is closed to the public.

St. Pio of Pietrelcina, more warmly known simply as Padre Pio, is one of the best known saints in Italy – nay, in the entire Catholic Church.

Born in 1887 to a simple farming family in the small town of Pietrelcina in Campania near Benevento, he was named by his mother Francesco after St. Francis of Assisi.

As a child, Francesco wanted to become a priest, but his parents could not afford to pay for his education – a scenario not uncommon in rural Italy in that era. His father lived off the land and although they did not experience privation, there was no extra money for books and private tutors. So his father emigrated to the United States to find work to be able to afford the academic requirements for Francesco to enter the seminary.

On January 6, 1903, at the age of 15, Francesco entered the Capuchin Franciscan Order, and at the conclusion of the novitiate was given the religious name Pio (Pius).

After ordination to the priesthood in 1910, he became frequently sick, which forced him to return home.

Back in Pietrelcina, when he was 21 years old, he received the stigmata – the wounds of Christ – the first time, though they did not remain.

When his health improved, he returned to the community near Benevento. Yet, his health was still weak and he suffered from various ailments affecting the lungs. Finally, his spiritual director suggested he go to the hill-town of San Giovanni Rotondo. At 623 meters sea level (2,040 feet), it was hoped that the air might be good for his health.

When he arrived in 1916 at the age of 29, Padre Pio knew he would remain there for the rest of his life. Indeed, he never left, and remained in San Giovanni Rotondo for 52 years until his death.

Once in San Giovanni Rotondo, the mystical phenomena that would characterize his life continued. In 1918, he experienced what is known as transverberation, or the piercing of the heart.

People went to him in confession and recounted that Padre Pio could “read their souls” and he knew their sins before confessing them. God gave him unusual gifts: He frequently prophesied and could foretell the future. There were stories of bilocation where Padre Pio would appear simultaneously in two places at the same time. He had the powers of healing as well. There are accounts of him physically clashing with the devil.

The phenomenon he is perhaps best known for took place on September 20, 1918, when Padre Pio received the five wounds of Christ. While praying before a crucifix in the choir stall above the ancient church, he not only felt the piercing pain in his hands, feet, and side — they left visible and open wounds.

His superiors ordered Padre Pio to undergo medical examinations on the wounds. The doctors who studied them concluded that the wounds were inexplicable as they did not heal or worsen over time.

A mystery also to him

When asked about all these phenomena, Padre Pio frequently responded that he himself did not understand them, and they were a mystery even to him.

Soon Padre Pio’s reputation as a mystic and healer began to spread far and wide. Priests and nobility as well as simple laypersons from all over began journeying to San Giovanni Rotondo seeking healings or graces. Some sought miracles for impossible illnesses, while others desired spiritual healings.

As devotion to Padre Pio sometimes bordered on fanaticism, Church authorities responded with prudence. For a period of time, Padre Pio was forbidden from hearing confessions, celebrating Mass in public, and from corresponding with his spiritual sons and daughters. This caused him immense suffering, though he obeyed entirely. Later, the order was lifted by the pope himself.

Despite the extraordinary grace and miracles surrounding his life, Padre Pio believed his greatest work was the construction of the hospital he built entirely through donations beginning in 1940. Named the Casa Sollievo della Sofferenza (House for Relief of Suffering), it reflects Padre Pio’s tireless works to help the sick. To this day, the hospital is considered one of the best in Southern Italy.

A gift for the Church

Padre Pio died on September 23, 1968, (a day he had foretold) clutching his rosary and repeating the names of Jesus and Mary. His wounds mysteriously healed upon his death, perhaps a divine sign that his earthly sufferings and ministries had been complete.

On May 2, 1999, Pope John Paul II declared Padre Pio “Blessed,” and he was canonized a saint on June 16, 2002. Half a million people attended the Mass in St. Peter’s Square, while others followed on a large screen in the square in St. John Lateran, and others still in San Giovanni Rotondo.

Before Padre Pio died, he said: “After my death I will make more commotion: my real mission will begin after my death.” Indeed, many people today testify to receiving graces through the intercession of Padre Pio, whether through dreams, the fragrance of roses, or other phenomena.

St. Pio of Pietrelcina, pray for us. 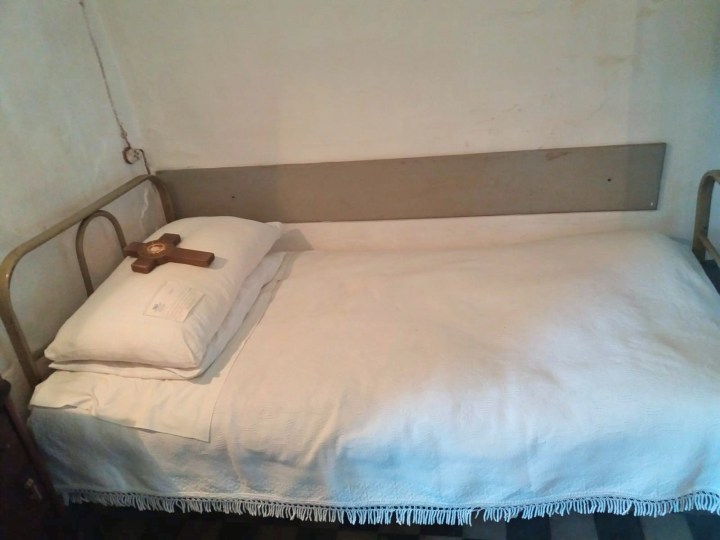