In the footsteps of St. Teresa of Ávila, a “restless, wandering nun”

Teresa founded at least 17 monasteries throughout Spain —from Burgos, in northern Castilla y León, to Sevilla and Granada, down south to Andalucía.

Teresa de Ávila was 46 years old when she decided to undertake the reform of the Carmelite Order — very much in the spirit of the Tridentine Catholic Counter-Reformation of the 16th century.

The year was 1561, and the Iberian Peninsula was living its Golden Age: the Spanish Siglo de Oro, when the flourishing of the arts and literature coincided with the political rise of the Spanish Empire under the Catholic Monarchs of Spain and the Habsburgs.

As the Spanish writer Arturo Pérez-Reverte aptly (and quite bluntly) puts it, “conquering half the world in the 16th century with a handful of rather short, illiterate, rough, bloodthirsty, and starving nobodies may not be the most delicate moral action in history; but, objectively speaking, it is an impressive feat.” Spain was certainly booming, and Ávila, “the town of saints and stones,” was not an exception at all. As the novelist and essayist José Martínez Ruiz (better known by his pseudonym, Azorín) once wrote, “Ávila is the most 16th-century town in Spain.”

Even if, to this day, the real origins of the Carmelite Order remain somewhat uncertain (tradition claims it was founded by Crusaders turned hermits living in the caves used by Elijah and Elisha in Mount Carmel during the Third Crusade), the Discalced Carmelite Reform intended to promote a return to its “original” founding spirit, a simpler and more withdrawn life of contemplation.

The first reformed monastery of the Discalced Carmelites, the convent of San José, was founded in 1562 in Teresa’s own hometown, Ávila. Known in antiquity as Abula (as read in Ptolemy’s Geographia), Ávila is said to be one of the first towns in Hispania to be Christianized —specifically, by Secundus of Abla, one of the noted Siete Varones Apostólicos (the “Seven Apostolic Men”) ordained in Rome by Peter and Paul and sent to evangelize Spain.

This first Discalced convent (the Convento de San José), declared a Spanish National Monument in 1968, and a World Heritage Site in 1985, is located in the Old City of Ávila Beyond the Walls (more on these legendary walls shortly). Even if the convent was built in 1562, the church (which is really way more interesting, at least architecturally speaking) was only built in 1607, more than 20 years after Teresa’s death. It was designed by the noted Spanish Renaissance architect Francisco de Mora as a rather sober building with a single nave, covered with an arched vault and a cupola on the transept. The facade and square follow the specifically Carmelite model created by the architect Fray Alberto de la Madre de Dios. In fact, the divided façade (with a pediment in the upper part and a three-arched portico in the lower) soon became one of the most imitated in the religious constructions of the 17th century. It would be the quintessential architectural model of the Order, very much like what the Church of the Gesù is for the Jesuits. The building is now home to the Teresian Museum of the Discalced Carmelites.

Fray Alberto was a Discalced Carmelite himself. He is now considered one of the main Spanish architects of the 17th century, and the one responsible for the introduction of Baroque elements in Castilian convents. Curiously, Alberto joined the Discalced Carmelites while still a very young man, and before becoming an architect he worked mostly in the kitchen. We know from some chronicles that he once prepared a hearty meal for St. John of the Cross himself, who was then ill.

The foundation of San José marked the beginning of Teresa’s life as a “restless and wandering nun,” as she was once (rather harshly) described by the then-Spanish nuncio. She founded at least 17 monasteries throughout Spain — from Burgos, in northern Castilla y León, to Sevilla and Granada, down south to Andalucía. This is certainly her most active period, not only as a convent-founding, driven woman, but also as a writer. She kept a minute chronicle of all her journeys throughout Spain in the Libro de las Fundaciones (“The Foundations”), but also wrote an autobiography (El Libro de la Vida), and two mystical treatises, the Camino de Perfección (Way of Perfection) and Las Moradas, o el Castillo Interior (The Dwellings, or The Interior Castle). All of these are regarded as among the most remarkable in the mystical literature of Catholicism, and of Christian mystical traditions in general.

Monastery of Discalced Carmelites of Puçol

But even if her “wandering” period certainly started in 1562, an episode from her childhood has often been read as prefiguring her later “roaming” drive. She herself tells, in her autobiography, that when she was only six or seven, she convinced her brother Rodrigo to accompany her to tierra de moros (“lands of the Moors”) so they could die martyrs. Her uncle found them when they were already beyond the walls of Ávila, and easily “persuaded” them not to do so. These legendary walls were first built by the Romans, and right after the fall of the Western Roman Empire, the town became a Visigothic stronghold. It was eventually conquered by the Moors, repeatedly attacked by the few northern Iberian Christian kingdoms remaining during Moorish rule, and ended up virtually uninhabited for a while, until it was repopulated by about 1088 following the definitive reconquest of the area by Raymond of Burgundy, who began the reconstruction of the original Roman walls as if they were a “stone frontier.” Today, those very same walls form the largest fully illuminated monument in the world, and they are said to have been the main inspiration for Teresa’s Interior Castle.

View the slideshow below to discover more of both the great mystic of Ávila, and of Ávila itself. 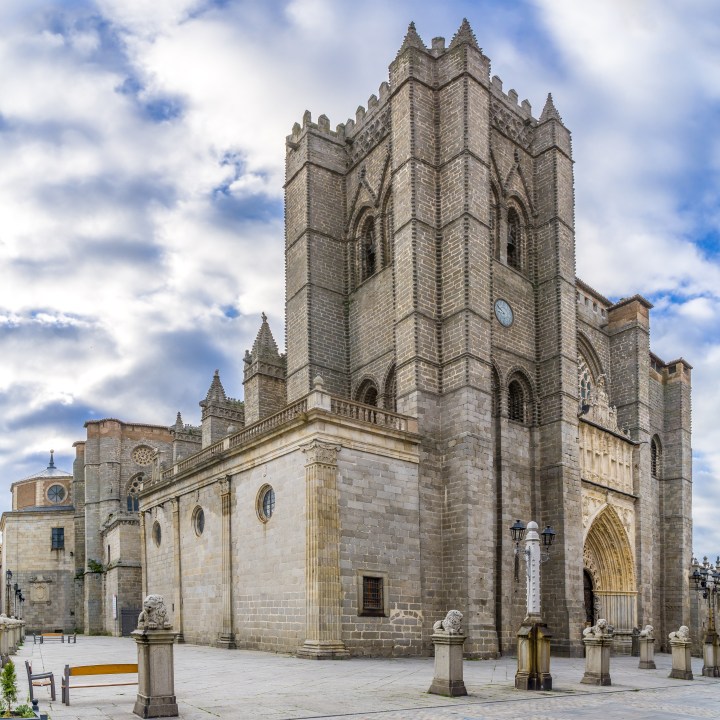