As of Sunday morning, the tomb of the Pope Emeritus in the Vatican Grottoes can be visited by the faithful

Pope Benedict XVI’s tomb in the Vatican Grottoes is now open to the public.

He was laid to rest on Thursday morning, after a Requiem Mass celebrated by Pope Francis.

He was placed in the tomb that Pope St. John Paul II was in until the Polish Pope’s body was moved to the Chapel of Saint Sebastian, on the main floor of the Basilica, after his beatification in 2011.

Above the tomb, the concave white wall has a single sculpture relief, a Virgin and Child flanked by two angels.

The Pontiff is surrounded by the sarcophagi of two monarchs who received the privilege of burial in the Vatican basilica: To his right, there is the tomb of Queen Christina of Sweden (1626-1689). Not far away, on the other side of the aisle, lies Charlotte, Queen of Cyprus, Jerusalem and Armenia, protected by Pope Pius IV in the 15th century.

In the same wing of the crypts of the basilica, notably rest Popes Paul VI, John Paul I, and Marcellus II, who lived for only 22 days after his election (1555).

Here are images from this morning: 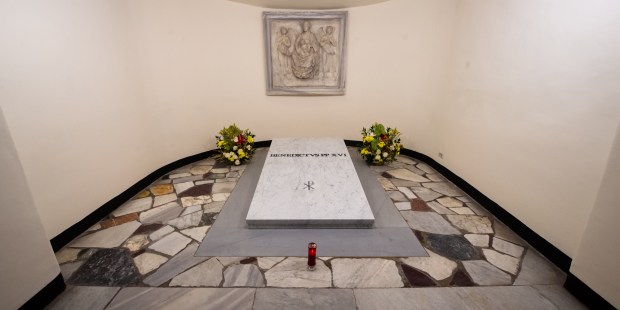