What should be done when jealousy devours a couple? 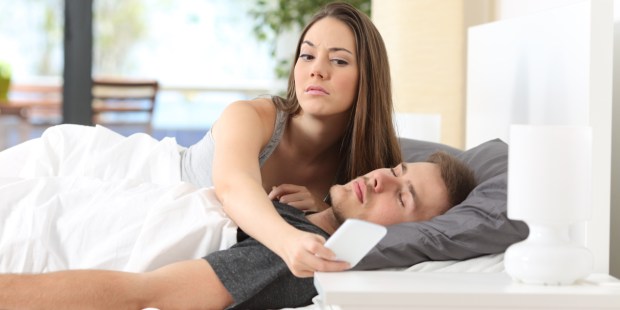 Shakespeare called jealousy “the green-eyed monster which doth mock the meat it feeds on.”

If early in the relationship, jealousy might seem like a proof of love, but it quickly becomes intolerable. How to eradicate jealousy and restore the calm and serenity in your relationship?

Fits of jealousy are a commonplace occurrence with many couples. Initially they seem endearing, providing each partner with proofs of love and often tending to spice up their love life. However, fairly quickly they turn nasty when unfounded and excessive. This article is not about a fit of justifiable jealousy or a slight kind of jealousy proper to the exclusive nature of true love; it’s about the unhealthy sentiment that makes one doubt, suspect, and fear without a reason.

From love to the destruction of the beloved and of oneself

This kind of unwholesome sentiment could quickly become intolerable for the suspected partner who is outraged by the scrutiny of his or her every step. But it is also unbearably painful for the one who is experiencing jealousy and is the first to suffer from the feeling of shame. Jealousy begets violence directed toward oneself and the other. It is an all-devouring monster, capable of destroying the most constant of affections and the greatest of loves. It sparks fear of not being able to survive some merciless rejection and leads to low self-esteem: “I know that I don’t deserve anything better. You’ve never loved me, and that’s normal, seeing what I am.”

As an observation of one’s own failures, it simultaneously leads to guilt and accusations being hurled at the other: “You don’t care about me, only about others” … “You only think of yourself”… It compels one to use any means at their disposal, including blackmail, to control the partner. It can even drive one to attempt to render the other jealous in their turn: “If you are not jealous, it’s because you don’t care about me!”

Anything becomes a pretext for a fit of jealousy: a child, a mother-in-law, work … all that can give the impression that one is no longer the priority. And there is no easy cure when jealousy has taken hold.

Where could this jealousy come from?

Obviously, one can do a lot to soothe a jealous partner. He or she could for example, take more initiatives in love. A person experiencing jealousy actually feels that he or she is unloved and requires frequent proofs of affection. His or her partner should also allow for more transparency in personal life, in what concerns their schedule, for example. The most innocent lie to avoid a quarrel could feed jealousy.

But mostly, it is up to the person who feels jealous to do the work to find peace. Therapy might be necessary in excessive cases. Nevertheless, strides toward ridding oneself of jealousy should be made in becoming more aware of the problem. It is rooted in the lack of self-confidence – it is themselves that jealous people doubt the most. They doubt their own capacity to seduce, because they consider themselves unworthy and fear that their partner will take notice of this fact. Where could the source of such lack of self-esteem lie? Many an explanation is possible.

First, it can be found in the past. All human beings had to vie with their siblings and their father for the love of someone they thought unique – their mother. There is jealousy that emerges with the birth of a younger sibling … and that is still there when the time comes to divide up the inheritance sometimes! Maybe such a person suffers from an education that cultivated competition and rivalry. Or perhaps, it is the old childish desire to possess everything. Does not the jealous person also strive to appropriate the very past of their partner?

The root of jealousy can also be found in recent past of the person. It could lie in recent events, when a partner demonstrated some ambiguous behavior. A provocative imprudence, too much or too little reserve on their part, for instance. Rumors can breed suspicions and destabilize the person. An old love affair (that one cannot forget about), the projection of one’s own temptations and infidelities on the other could also destroy the trust.

How to escape the infernal cycle of jealousy

One must resist the tendency of becoming possessive: jealousy is often the other aspect of possessive love. True love is self-sacrificing. It does not imprison the partner, which is what makes it the best way of securing his or her affections. Love can only grow when it is free. The jealous person must realize what the other contributes to the relationship instead of focusing on some small detail that their partner forgot about.

The notion of certainty that “no one is beyond suspicion” should be eradicated. Many jealous people have a tendency of connecting the dots and in accumulating the smallest of details end up feeling certain that they have been betrayed. The jealous person also needs to pay attention that their partner finds what they wish in the relationship: this will help prevent them from straying. But most importantly, one must learn to trust in God and in oneself. One must develop the sense that he or she is unique and irreplaceable, to see oneself through the eyes of God. Why doubt ourselves, when He has no doubt in his Eternity?

Read more:
9 Ways to prepare your child for a new sibling

Read more:
Tips on how to curb jealous and greedy thoughts