How to write a love letter to your spouse 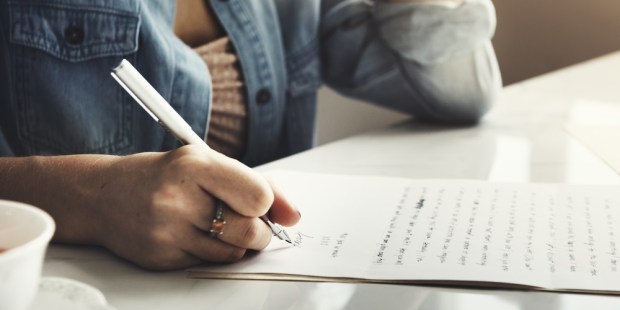 There is nothing more romantic than expressing your feelings in a note written from the heart.

Has digital technology killed love letters forever? Most conversations between spouses today take place via text messages, and 21st-century couples are missing a unique language. A letter is a precious language in our daily life that honors marriage. “Writing helps me make it through the daily routine,” sums up Amy, who’s been married for 15 years.

Writing means dedicating time to your loved one

Most spouses are touched by the attention their partner gives them by writing. Letters have become so uncommon that they arouse, in both sender and receiver, “a mixture of expectation, fear and pleasure,” sums up Paul, who’s been married for 30 years. “I like the idea of dedicating time to my wife and the time that she dedicates to me when she writes. I have to find a stamp, choose the postcard, get a pen, write the address. Writing is a very physical process, and it tells the other person that you have bothered to take the time to do it.” A sales agent, he takes advantage of the time he spends traveling to regularly send post cards to his wife. It’s a very simple but deep and passionate way to maintain and create connection. It’s a kind of easy communication, even for the spouse who thinks they can’t write very well.

In this sense, sharing an unknown detail about yourself can be more moving than a grand literary speech. A letter is never trivial, even though it may talk about everyday things, “as long as it doesn’t just mention facts—it should also deal with your personal feelings relative to those facts,” advises marriage counselor Bénédicte de Dinechin. In this case, it reinforces the relationship. Joan was touched by a postcard with her patron saint on it where her husband had written: “This statue reminds me of how much I need your strength”—a phrase much more moving than if he had written “Joan of Arc is strong like you!”.

A letter is never trivial

The traditional purpose of love letters has always been to lament absence. Alexa, whose military husband regularly leaves for several months at a time, shares her day-to-day in a weekly letter to stay in touch with her husband, and also so that his return is not so abrupt. For Gwendolyn, alone on vacation with her kids for a month in summer, the time passes more quickly when she gets a letter from her husband. She likes the ritual of it: feeling the envelope, opening it, unfolding the paper, alone in her room, savoring the words. “Reading it fills me with gratitude and memories of good moments. It’s as if the distance disappears.” And she too, in her answers to Eric, tries to make him happy. It’s a virtuous cycle, says Bénédicte de Dinechin: “Writing a letter that makes the other feel valued has an impact on you as well, since the letter becomes a kind of keepsake and reinforcement that nourishes the couple. The one who writes feels their heart expand and becomes the main beneficiary of their own generosity.”

Pauline and Louis also like to inscribe their relationship in time via a letter that they send each other from their yearly place of retreat, where each one goes separately. It is a long letter, granted ritual status, written from a place where the writer faces him/herself and can be completely sincere. They evoke their relationship with God, their commitments, their pending projects and propose ideas for improvement.

Letters also help avoid verbal outbursts if there is a conflict. When you are getting along, it helps you open up in a constructive way. Evelyn and Ethan write to each other at least once a month. This epistolary communication has produced “a new boost” to the couple, just as their children have left the family nest. Ethan explains: “The letter develops our relationship of love, but not in a romantic sense, really. It enriches the content of our marital communication and we dare to bring up topics that our natural tendency of avoiding conflict would keep us from discussing.” This method has many benefits as long as it is followed up with a verbal exchange, because a letter cannot replace dialogue: it prepares for it or it re-opens it.

An extension of the fidelity promised on the wedding day

For some couples, letters allow them to re-read their lives, have fun, become aware of a sensitive issue, discuss weak points, forgive themselves, or reveal the unique character of the relationship. Bruno, married for 22 years, gives his wife a letter two times a week, when he comes home from work. In the time he spends every day commuting by train, he reads his prayer book, and then he writes to her on a blank sheet of paper. “Sometimes it’s short and banal; other times, intense and deep, and having this time reserved for her on my calendar extends the fidelity I promised on the day of our wedding,” explains this father of four.

The same thing happens with Amy and Jack. They reserve half an hour every Monday to go to a bar, face to face, to write each other a letter. “Why do you write a letter to Dad if you see him every day?” asks Amy’s 12-year-old daughter. The couple knows why: they show specifically that their love for each other is the priority. This way they build up proof of love to lean on during the difficult times in their life as a couple. Amy lets herself get poetic, write compliments, or express criticisms. Alone facing the page, she learns to reason and develop her thoughts. Contrary to writing text messages, here she always sits down to write, to sit down with her thoughts. Letters of forgiveness, of scolding, of gratitude. This woman, dyslexic in the past has, in this way, learned to express her emotions.

And lastly, writing allows you to orient yourselves towards the future. “The love letter—even though we may be dealing with difficult issues—inscribes our relationship between the past and the future. It always starts with words of appreciation for your spouse and ends with the promise of a ‘small step’ that you promise to take for them very soon,” points out Evelyn. This imprint of eternity that love letters carry inscribes the relationship in time. “In 40 years, we won’t be able to discover an old box of WhatsApps, Facebook posts, or text messages in a dusty corner of a closet. But we will be able to come across our letters,” Paul says enthusiastically. “And then … that will be exciting!”

Read more:
Why writing well is more important than ever