Two New Saints and the Diversity of the Church 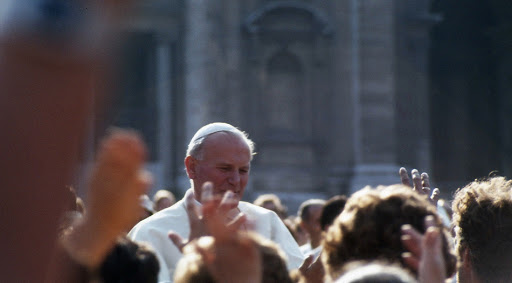 We love jokes that begin "a priest, a rabbi, and a minister went into a bar …" or "a blonde, a brunette, and a redhead went into a bar …" Now we hear, "An Italian, a Pole, a German, and an Argentinian went into the Vatican …" Two of them will soon go into a consistory of cardinals to be made saints: the Italian reformer who was as surprised as anyone by the idea of a second Vatican Council, and the Polish philosopher, ex-actor, university professor from behind the iron curtain. The former’s beatification was approved by a scholarly German author of theology books, the latter’s is now being permitted by an unassuming Argentinian who came to Rome to vote for a Pope, and never went home again.

John XXIII was ordained a priest in 1904, became chaplain to wounded soldiers after being drafted into the first World War, organized relief efforts after a 1928 earthquake in Bulgaria where he was Apostolic Visitator, became Apostolic Delegate to Turkey and Greece in 1935 where he dialogued with Orthodox Christians, was made patriarch of Venice in 1953, and elected Pope in 1958. He saw people killed in two world wars in the name of nationalism, he saw people killed in the name of communist ideology, and he saw Christians disunited. Was this on his mind when he called the second Vatican Council?

John Paul the Great had talents in philosophy, was gifted in languages, and enjoyed the acting, but was finally drawn into the priesthood. In 1939 Nazi German occupation forces closed the University where he was studying, and three years later he knocked on the bishop’s door in Krakow to study in the underground seminary. While a parish priest he taught university courses in ethics, a combination he kept up while Archbishop of Krakow and teaching at Lublin University. A focus was on individual love and responsibility. Was this on his mind when he opposed any dehumanization, whether communism from without or the culture of death from within?

Their lives were very different, yet very close because of a shared faith. And it is that paradox which reminds me of a passage from a 1925 book by Karl Adam, titled The Spirit of Catholicism.

Adam admits that each of these saints "is marked with the stamp of his own time, some very plainly so." As a result, there are many with whom we can no longer establish any sympathetic contact; there are many others for whom we take a natural liking. But this does not matter, Adam says, because "there is but One who is ever modern, never out of date, One only who belongs to all time." The saint is a facet of the one diamond, and each saint flashes the brilliance of one Christ.  Therefore, Adam concludes, "however much the saints may be marked with the stamp of their time, and however imperfectly they may represent the perfection of Christ, there is but one spirit that animates them all and makes them all dear to us, and it is the spirit of Jesus, the spirit of His great and holy love."

There are things in Catholicism we already understand, but we remain with Mother Church because she tells us things we do not yet understand. And she tells them to me through the voices of the most extraordinarily diverse communion of saints, to whom two more are soon to be added.