We Khon dance if we want to 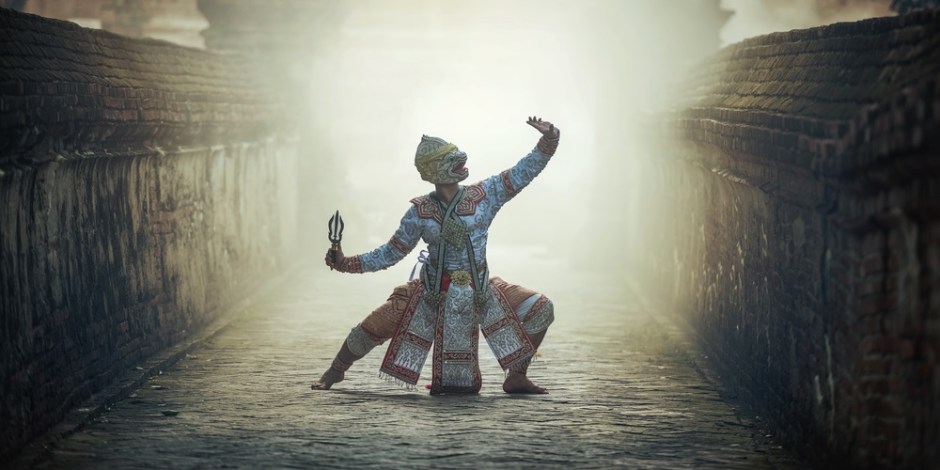 THAILAND – A masked individual performs Khon dance. Khon is the traditional dance drama art of the Thai, classically masked. It dramatizes the Ramakien, a uniquely Thai retelling of the classical Sanskrit Ramayana epic with additions from Thai Buddhism and folk tales.

Khon (Thai: โขน) is a genre of dance drama from Thailand. It is traditionally performed solely in the royal court, by men in masks accompanied by narrators and a traditional piphat ensemble. A variation of this genre with female performers is called khon phu ying

There are four prominent characters in every Khon performance: The Hero, The Heroine, The Ogre, and the Monkey. While historically, all characters were played by male performers in masks and costumes, women are now cast in prominent feminine roles or as the Monkey. Masks are still worn by the Ogre and Monkey characters, while the human characters are now only in makeup.

Body type has a lot to do with casting. The Hero and Heroine characters are supposed to have the ideal build of a human male and female. The Hero conducts himself with regal posture and approachable demeanor, while the Heroine focuses on beauty and delicacy. The Ogre and monkey, however seek players with body types in distortion of the prior characters. The Ogre is generally cast as a man who has proportions equivalent to the Hero, while exaggerated in size, while the Monkey looks for dancers with longer limbs, while retaining the beauty of the heroine.

The dance is acrobatic in nature; however, no part is as intricate as the Monkey. Dancers who aspire to play the Monkey must begin their training at a young age to develop their bodies for the nimble feats required of the role. While the Monkey’s gestures and posture are base and primitive, the actor must maintain the same beauty and delicacy of the Heroine.

While Khon is performed in many counties such as Myanmar, India, Cambodia, Laos and Malaysia, it is widely accepted as originating in Thailand.