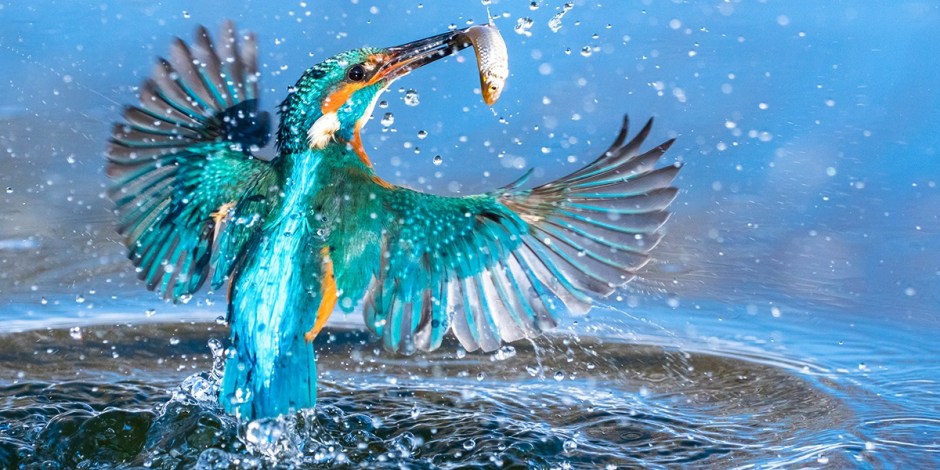 This week we are featuring some of the best photos submitted to the Sony 2017 Photography awards. These high-res photos of animals in their natural environments are breathtaking and vibrant.

PALOVEC, Croatia – 2016: The image “Swirl” was made at the beginning of 2016, at a local pond near Palovec. It shows the moment when a small bird, known as a kingfisher, flies out of the water with a little fish in his beak. The image was named for the swirl effect that this maneuver has on the water as well as the contortions of the fish.

This photo was shot using a Sony 70-400G2 SSM lens and Sony a77II camera at 12 fps burst mode and captured the kingfisher at the perfect moment with wings fully spread.

Kingfishers are tiny birds that can be found on every continent, except Antarctica. The only places that it does not thrive are arid or frozen regions. They come in a variety of colors and sizes, but they all share the trait of an elongated beak. This beak aids them in their fishing, which they are very good at.

When fishing, the little birds perch above the water and use their exceptional eyesight (kingfishers can move their eyes in the socket, rather than having to turn their whole head like most birds) to watch the surface until they see a fish. The kingfisher then swoops down, diving unto the water until it is fully submerged in attempt to grab a snack. Despite the surprise attack, kingfishers often need more than one attempt to catch a fish.

All type of kingfishers kill the fish by beating them against the ground, and swallow them whole. It is not uncommon to see a kingfisher attempt, and succeed, to eat something much bigger than its mouth should be able to fit. Despite the name kingfisher, they also eat bugs, worms, crustaceans, crabs, small mammals and frogs.

The flash of a kingfisher’s wings was used to great effect by the English Jesuit poet in his poem “As Kingfishers Catch Fire,” with its well-known closing lines:

. . . for Christ plays in ten thousand places,
Lovely in limbs, and lovely in eyes not his
To the Father through the features of men’s faces.
Tags:
Photo of the Day
Daily prayer
Aleteia's Top 10
See More
Advertising
Newsletter
Get Aleteia delivered to your inbox. Subscribe here.
Thank you! Your submission has been received!