Holy Week Around the World: The scandal in Trafalgar Square 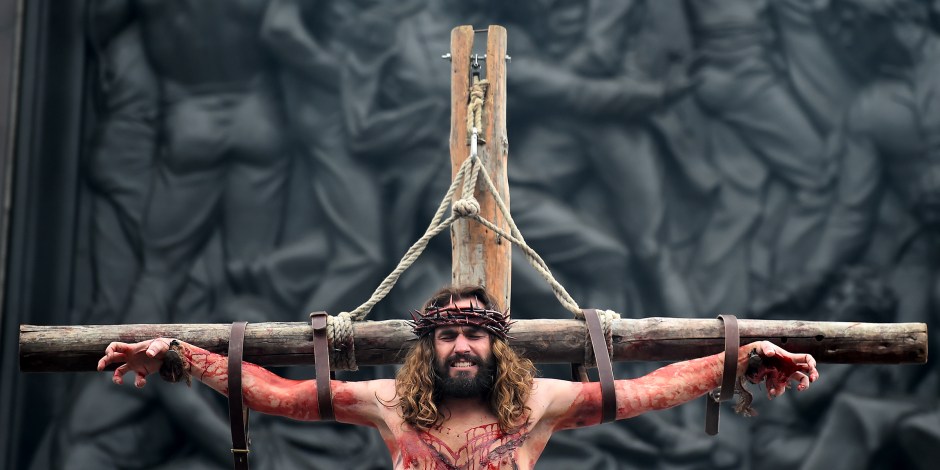 HOLY WEEK AROUND THE WORLD: London

CENTRAL LONDON: On Good Friday in Trafalgar Square, actor James Burke-Dunsmore performs the role of Jesus, raised up and dying upon the cross, in “The Passion of Jesus” by the Wintershall Players. Good Friday is a Christian religious holiday before Easter Sunday, commemorating the crucifixion of Jesus Christ.

So they took Jesus and carrying the cross himself he went out to what is called the Place of the Skull, in Hebrew, Golgotha. There they crucified him, and with him two others, one on either side, with Jesus in the middle.

When the soldiers had crucified Jesus,k they took his clothes and divided them into four shares, a share for each soldier. They also took his tunic, but the tunic was seamless, woven in one piece from the top down. So they said to one another, “Let’s not tear it, but cast lots for it to see whose it will be,” in order that the passage of scripture might be fulfilled [that says]: “They divided my garments among them, and for my vesture they cast lots.”

This is what the soldiers did.

After this, aware that everything was now finished, in order that the scripture might be fulfilled, Jesus said, “I thirst.” There was a vessel filled with common wine. So they put a sponge soaked in wine on a sprig of hyssop and put it up to his mouth. When Jesus had taken the wine, he said, “It is finished.” And bowing his head, he handed over the spirit.
John 19:17-30

Photo by Ben Stansall via AFP