The beloved physician greets you 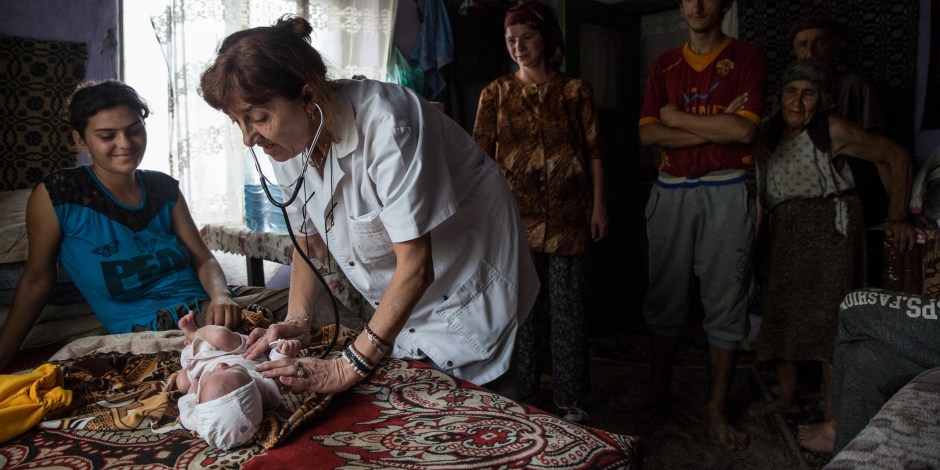 GANGIOVA, Romania – AUGUST 18, 2016: Dr. Ciupitu doing a house call to consult on an infant. The child had otitis due to improper bathing. According to Eurostat data, with an infant mortality rate of 8.4 deaths per 1,000 live births in 2014, Romania ranks first among European countries (the EU rate is 3.7). Gangiova, Romania, 18 Aug 2016

“Good day, doctor! Good evening, doctor,” voices of people of all ages greet her kindly as Floarea Ciupitu walks around the village. At 61 she has been a family doctor serving Gangiova, a village in south-west Romania, for the past three decades. Ciupitu oversees roughly 1,700 registered patients. On week days she sleeps above her practice in a tiny room, on an old hospital bed. At night, a tiny flashlight guides her way one store up to her modest accommodation, no electricity on the staircase.

Romania has a population of almost 20 million. Doctors in rural areas are outnumbered by peers in cities two to one, while half of the population lives in the countryside. The healthcare sector is overrun with crises and never ending problems. In 27 years since the anticommunist revolution of 1989, the country has had at least 25 health ministers take office. Doctors, especially younger ones, are fleeing the country in search of better work conditions and career opportunities. The Romanian Health Ministry states there is a severe doctors shortage.

While things may look a little better in the city, Romania’s villages are plagued with a lack of access to healthcare. Family doctors are often overworked having to care for a larger number of patients than the recommended average. Ciupitu is living proof that, despite all the difficulties and the problems in a flawed system, there still are doctors who commit to their patients. She stands to help remember that being a doctor is a calling.

Series Name: A country doctor and her calling.