Drinking juice … who knew it was such a problem? 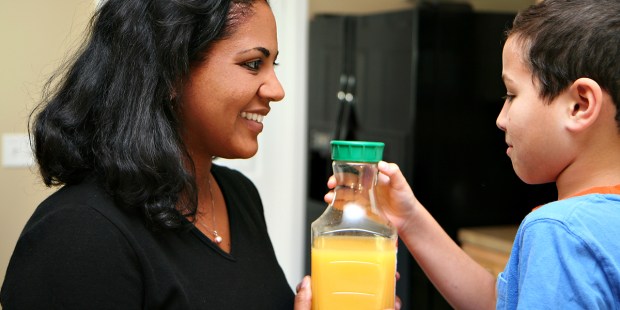 According to research, it’s best to eat your fruits and veggies, not drink them.

My husband’s family are big juice drinkers. They had juice every day growing up, sometimes with every meal, so my husband thought I was crazy when I told him that juice is terrible for kids. Drinking juice was a common part of childhood in the 80s, and everyone thought it was healthy. Judging by the number of juice bars and the popularity of that idiotic Juicero thing, everyone still does. I mean, it’s fruit, right?

Wrong. Three doctors recently dispelled the myth of fruit juice as a health food in the Washington Post:

As diabetes specialists, we see patients like her all the time, who for one reason or another believe that juice is a health food. The truth is that fruit juice, even if it is freshly pressed, 100 percent juice, is little more than sugar water. Yet many Americans believe that juice is good for them. In one survey of parents of young children, one in three believed that juice was at least as healthy as fruit.

Drinking juice is not the same thing as eating fruit — even drinking kale smoothies isn’t the same thing as eating kale. That’s because making juice disposes of some of the most important parts of the fruit, like the skin of an apple, the seeds in a raspberry, and the membranes in an orange. These contain important vitamins and minerals, but they also have most of the fiber in the fruit.

Fiber does more than just help move food through your digestive tract; it also helps control insulin spikes by slowing down the absorption of sugars. It’s almost like fruit has a built-in defense mechanism for your body, so you get the vitamins and minerals without the harmful sugar high. Turning fruit into juice destroys that defense mechanism.

Read more:
Are you depressed? You may need more of these 10 nutrients

Fiber also helps fill you up so you eat less, but that doesn’t mean you can solve the juice-doesn’t-contain-fiber problem by just pureeing the whole dang orange. The act of chewing matters.

According to the diabetes specialists, an orange contains 45 calories and an 8-oz glass of orange juice contains 110 calories. I just made the mistake of asking Google how many calories are in my favorite smoothie, Tropical Smoothie’s Island Green, and now I wish I had never started writing this post (spoiler alert: it’s about the same amount that are in a Krispy Kreme apple fritter). But I don’t often drink a smoothie as a meal replacement — it’s just not the same as food. So what I’m getting is a few nutrients and a whole lot of insulin-spiking fructose, and several hundred extra calories.

According to the Washington Post, researchers gave adults an apple to eat 15 minutes before a meal, in several different forms. Each day, each adult got either a whole apple, applesauce, apple juice, or apple juice with the fiber added back in. Consistently, each adult ate fewer calories on the day they ate the apple than on the days when they consumed the same amount of calories from applesauce or apple juice.

It isn’t just the fiber that matters, it’s the way the fiber is consumed. Chewing counts. It sends signals to your brain to release hormones that help prepare your body for digestion, which prepares your stomach to receive food and and send a signal back when it’s full.

So throw out your Juicero and those kid-sized juice boxes, drink water and eat your fruits and vegetables the old-fashioned way!