5 saints to inspire us to take care of our planet 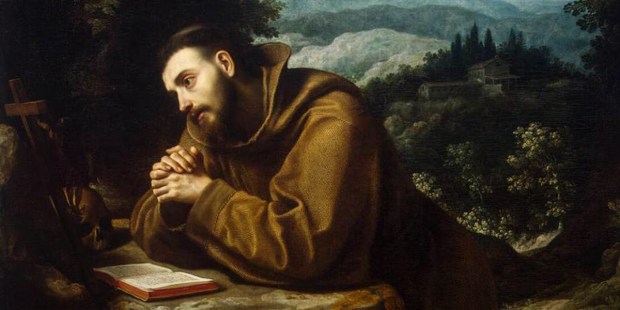 We tend to think of environmentalism as a modern concept, but the saints were already practicing it long ago

Recently, the United States drew a heated reaction by leaving the Paris Accord, which is a voluntary agreement among various nations aimed at curbing greenhouse gas emission. There are lots of opinions on the matter, ranging from “historic mistake,” to “it was a bad deal and it’s good we got out of it.”

Whatever the merits of the agreement itself, as the story trended in the news cycle it was heartening to see renewed pledges by individuals and smaller communities to continue addressing the way we treat our environment.

Not too long ago, Pope Francis wrote an in-depth letter on the topic of caring for the earth, titled Laudato Si. It’s well worth a read, but it’s also interesting to note that this isn’t the first time that people of faith have made clear the connection of spirituality and human flourishing with the way we interact with nature.

Here are five saints whose words and actions will encourage us today as we ponder how we can continue to care for the earth.

Kateri was raised in the Iroquois nation, who environmental scientist Bill Jacobs says, “carefully managed the fields, forests, and wildlife of their homeland. They understood the rhythms of nature…Kateri herself would have intimately known the plants and animals around her, in a way that any botanist or biologist today would envy.” For this reason, she is referred to as a, “child of nature,” who often went into the woods to make crosses out of sticks and to talk to God. It was in the silence of creation, far from the noise of the village, that she was able to commune with her Creator. Her experience is probably familiar to a lot of us and goes to show how precious the environment around us is and how important it is to protect it. If we lose these quiet places where we can get lost in nature, we will lose a vital avenue of spirituality.

Benedict wasn’t an environmentalist in the modern sense, mostly because our damaged relationship with the earth is a modern problem, but his outlook on life reflects a concern with ecology. Benedict believed that a spiritual person will, along with prayer, work to make the world a better, more harmonious place. This is why most of his followers commit to staying on one piece of land for long periods of time and improving it. It’s also why many are involved with brewing beer, raising bees, or some form of organic farming or handcraft. The principles by which he lived his life are summarized in a book called the Rule of St. Benedict, and in it he recommends humility, commitment to improving your local neighborhood, and frugality. “Frugality should be the rule on all occasions,” he writes, because taking more than your fair share and then wasting it throws off the ecological balance of both the soul and the environment. Benedict appreciated the beauty of the earth and its ability to reflect the beauty of heaven and he took every care to preserve and improve it.

In 1971, Pope Paul VI labeled environmental degradation to be one of the most pressing problems facing humanity, at least partly linking our care for the environment to our own spiritual health. His words are a clear warning that are, unfortunately, proving to be prophetic: “Man is suddenly becoming aware that by an ill-considered exploitation of nature he risks destroying it and becoming in his turn the victim of this degradation.” Not only do we eventually become the victims of a destroyed earth that can no longer sustain us, but there is also an effect on the human soul in the sense that an environment that no longer tolerates our presence creates a spiritual difficulty – we are no longer in harmony with the earth, and the way we treat our environment is a reflection on how we treat other people. This is why Paul VI identifies damage to the environment as a major human crisis that affects all of us. The solution? The courage to make a radical change.

Dorothy Day is remembered for living in solidarity with the urban poor, but her Catholic Worker movement was also interested in rural farming. At first, her focus was only on the urban poor and she didn’t quite see the point of ecology or how nature was her particular concern, but her friend Peter Maurin eventually convinced her that it was important. Although she started out skeptical, she agreed to attend a women’s retreat on a working farm and excitedly reported, “We have learned to meditate and bake bread, pray and extract honey, sing and make butter, cheese, cider, wine, and sauerkraut.” After that, she came to see that environmental stewardship was intimately connected with her mission to help the poor, at least in part because, “it would be wonderful to live entirely off the land and not depend on wages for a livelihood.” The Catholic Workers founded a farm called Maryfarm, which she described as “the heart of the work.” What Dorothy Day came to appreciate about close contact with nature is the way it reconnects us to our roots and helps develop a profound gratitude for the sustenance we receive from the earth. This, in turn, provides a healthy basis to find dignity in the human beings we encounter in the course of our lives. A love for the environment can support love for our fellow man.

St. Francis famously loved animals, even to the extent of preaching to them, but his love extends well beyond being a dog-lover and embraces all of creation. He saw a strong bond between himself and the environment, inviting all of nature to give glory to God. In his Canticle of the Sun, Francis refers to “Brother Sun,” “Sister Moon,” and “Mother Earth.” About the sun, he writes: “Be praised, my Lord, through all your creatures, especially through my lord Brother Sun, who brings the day; and you give light through him. And he is beautiful and radiant in all his splendor!”

His follower St. Bonaventure says that Francis extended brotherhood to even the smallest of creatures. In each, he sees a reflection of God, meaning that the more we find fraternity with the environment, the more we are connected with the Creator