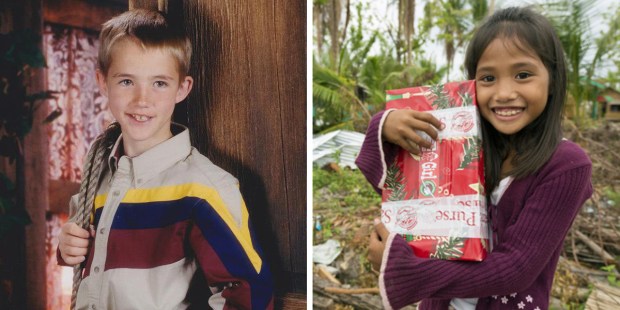 A shoebox brought them together across thousands of miles.

Who knew that an act of kindness could lead you to the love of your life? But that is exactly what happened when Tyrel Wolfe participated in a Christmas project that sends shoeboxes filled with toys and supplies to kids in need. In 2000, when Tyrel was just 7 years old, he sent a gift-filled shoebox to a little girl in the Philippines, Joana Marchan. She was 8 at the time, and received her shoebox along with a picture of handsome Tyrel Wolfe in his cowboy costume. Joana sent the young boy a thank-you note, but it never reached his mailbox. She never forgot about the boy who sent her the thoughtful Christmas box.

Fourteen years later, Joana was on Facebook and became curious as to what had become of the young boy whose photo she still cherished. She sent him a friend request in 2009 that he ignored because he didn’t know who she was. Two years later she tried again. This time he accepted the request and sent her a message asking her how they knew each other. He didn’t remember much about the Christmas box until his mother reminded him that he participated in an event through his church. As they messaged back and forth, they found that they both were passionate about their faith and shared a love for Christian music.

They spent a year corresponding on Facebook before Tyrel decided he had to see this woman with whom he had so much in common. In 2013, although nervous about traveling alone to another country, he used his savings to fly to the Philippines. When he saw Joana for the first time he realized it was worth every penny. It was love at first sight for these two kids from different parts of the world brought together by a single shoebox.

Joana recalls the first time she met him, “Once I saw his face, an amazing feeling came over me.” Tyrel felt the same way. “I was immediately attracted to her,” Tyrel recounts. “When I finally got there and saw her, I had to punch myself a couple times because I thought it was a dream.”

The couple married on October 5, 2014, and in honor of how they met they had their guests bring Christmas boxes to be distributed to children overseas. The newlyweds now live in Midvale, Idaho, near Tyrel’s parents, and recently welcomed their first son into the world.

The organization that brought the couple together is called Samaritan’s Purse, a Christian organization that provides spiritual and physical aid to those in need around the world. It has been serving victims of war, poverty, disease, and natural disasters since 1970, all while sharing the love of Jesus Christ. One way Samaritan’s Purse helps those in need is through the Operation Christmas Child project, the same project Tyrel participated in years ago. Since 1993, the project has delivered more than 100 million shoeboxes to children in more than 130 countries.