How pregnancy forced me to abandon my immodest behavior 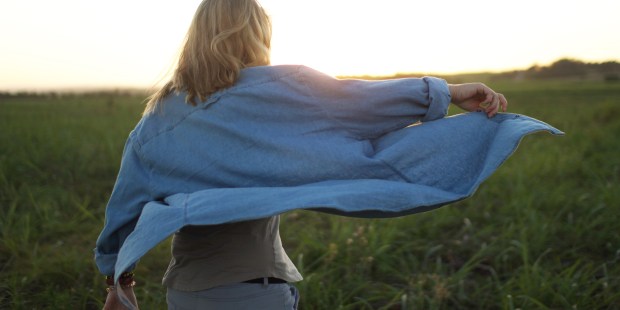 Modesty goes a lot deeper than most of us think.

When you’re pregnant, it’s a little bit alarming how fast your body changes. You wake up one morning, and suddenly nothing fits. You get stretch marks, acne, and everything swells up. You’re exhausted from waking up to pee every two hours, and from having no comfortable position to sleep in that doesn’t pop a hip out of place, or crush the air out of your lungs. You know … normal stuff.

At some point, out of sheer necessity, I had to go into survival mode and let some things slide. Makeup was first to go, and then nicely done hair, and by the end of five months, my general attitude toward getting dressed has become, “This is what fits so this is what I’m wearing. Everyone else is going to have to deal with it.”

I’ve been warned against this attitude. Once you start to let yourself go, people say, you start losing self-respect, and it may well trigger depression. But to my surprise, I found the opposite to be true. Against all odds, I started liking my body more. I started carrying myself with more confidence. I gained a new level of self-respect I wasn’t expecting.

It’s because I got too tired to keep hustling to live up to the idea that my body is there for some other purpose than to be the physical dimension of the fascinating, valuable, body-and-soul creature that is me.

When I had energy, I could play the game. I could make sure I looked exactly like I wanted, and present the perfect face to the world. Well, looking great is wonderful; it’s a dimension of charity, akin to good manners, to take care in your appearance. But when the motivation behind the way I present myself is to try to make you like me, to try to prove that I’m as perfect and put-together on the inside as on the outside, I’ve started to think of my body as a means to an end, not as something that’s good in itself. That’s a foolproof way to kill off self-respect.

That “means to an end” attitude is actually immodest for the same reason that it’s immodest to flaunt your sexuality in order to have power over people. Our bodies aren’t things to be used, period. Not by you, and not by me.

Our bodies are useful, for sure. The way we dress, carry ourselves, and act, is a silent language which speaks volumes about our core values and personality. (A language that has a cultural context, of course, but a language nonetheless.) But ultimately, human beings are not object; we are subject. We are our bodies as much as we are our souls, so our usefulness must never be seen to overshadow our inherent worth.

Modesty is usually framed in terms of not seeking sexual attention, but that’s much too specific. It’s really a dimension of humility, the virtue which charges us not to flaunt and seek attention for what we have, whatever that is — an hourglass shape, wealth, intelligence, talent, physical strength, anything. Flaunting your perfect outfit is immodest for the same reason that flaunting your cleavage is immodest. There’s nothing wrong with the outfit, or with your body, but if your goal is to show off, well, showing off is immodest.

When it comes to modesty, there are two extremes. You can say, “It’s my body, I can do whatever I want with it,” but that also means that it’s fine to go around punching old ladies and feeding yourself garbage all the time. We have a duty to take care of our bodies and do good with them, as much as we do our souls.

Although I belong to myself, what I do has an effect on the world, and I have to remember that. The opposite extreme, though, the idea that I’m responsible for how you react to me, is just as bad. When I believe that, I am only viewing my body as a thing to be used, a means to achieving something — power, respect, admiration, or love.

When my pregnancy forced me to worry less about how I look, I ended up respecting myself more, because I stopped thinking of my body as a way to make other people think better of me, or really, to make them think anything at all of me — suddenly it was just me, walking around in the body I have, that’s it. I began to remember that, as the slogan goes, “I’m not here to decorate your world.”

My body is me, and it is good that I exist. Who’d have thought this attitude would coincide so well with authentic modesty?

Read more:
The Secret to Modesty

Read more:
The mercy of modesty (a lesson learned on a nude beach)