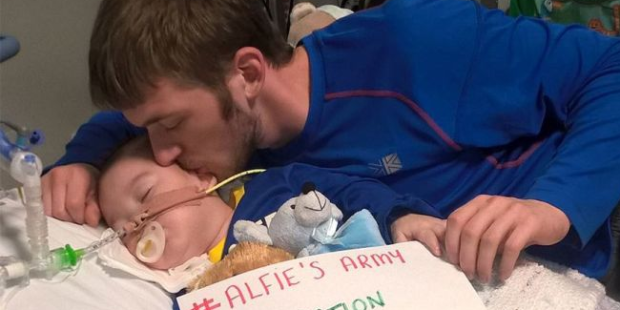 Says he hopes that the sick child can be compassionately accompanied

Pope Francis has spoken through Twitter about the case of little Alfie Evans, the 23-month-old British boy suffering from an undiagnosed brain condition who might have his life support turned off as early as Friday.

Alfie’s parents, Tom Evans and Kate James, have been in a legal battle with Alder Hey Children’s Hospital. The parents maintain that Alfie has recently shown progress and want to continue to keep him alive through artificial ventilation. Their legal options are exhausted, however, as medical experts maintain that it is in Alfie’s best interests to have the ventilators removed.

It is my sincere hope that everything necessary may be done in order to continue compassionately accompanying little Alfie Evans, and that the deep suffering of his parents may be heard. I am praying for Alfie, for his family and for all who are involved.

No human life is worthless

A leading bioethics organization in the U.K.  had already released a statement about the case some weeks ago, emphasizing both that every life deserves respect and that not every possible treatment is worth pursuing.

“Every human life is worthy of respect, and patients’ lives should not be targeted deliberately, although not every treatment is worth pursuing,” said the Anscombe Bioethics Centre, a national Catholic bioethics center for the UK and Ireland, in a statement. “Doctors should not be forced to continue treatment if they believe it offers little or no benefit relative to the burdens it entails, nor should they be forced to refer for specific treatments that they do not believe to be in the best interests of their patient.”

“Indeed, patients have a right to a second medical opinion and a general right to seek alternative treatment,” said its statement. “In the case of children, it is the parents who have prime responsibility for their own child and this responsibility entails the right to protect their child’s interests as they see them. Parental rights, which exist for the sake of the child in the first instance, should not be taken from parents unless they have been shown to have acted unreasonably and put their child at significant risk. Doctors do not always get things right in treatment or care, and where parents have lost faith in the doctors caring for their child they may seek treatment and care for their child elsewhere. If the child can be moved without undue risk or burden, the parents should normally be permitted to transfer the care of their child to other suitably qualified doctors, whether in this country or abroad.”

In the case of Alfie Evans, it is “not clear that the treatment itself is causing Alfie to suffer and it is not clear whether Alfie may not still be able to experience some simple pleasures such as having his arm stroked,” said Anscombe.

Anscombe cautioned against deciding that a life should come to an end because it is seen as “worthless” or due to illness or disability. “No human life is worthless, and treatment may only be withdrawn for the right reasons, such as lack of resources or undue burden in relation to its benefits,” it said.

The case and its international spotlight have brought to mind another little boy who died last year after a similar legal battle, Charlie Gard. The pope also weighed in on his case.

Read more:
Pope asks us all to pray for Charlie Gard’s parents to experience God’s consolation