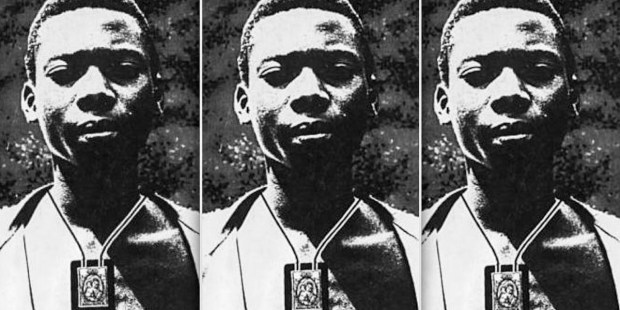 Scourged with a whip, Bakanja had mercy on those who violently persecuted him.

It’s not easy forgiving those who persecute you, especially those who do so because of your faith or even the color of your skin. Yet, Isidore Bakanja did just that after being brought to the point of death because of the violent actions of his employer.

Isidore Bakanja was born in 1887 in Bokendela in Belgian Congo and was evangelized by Belgian Trappist missionaries, receiving the sacrament of Baptism at 18. He was a mild and honest young man who faithfully adhered to everything the missionaries told him. He carried a rosary with him wherever he went and always wore “Mary’s Habit” (the Brown Scapular) underneath his clothing.

Bakanja was zealous in his faith and shared it with whomever would listen. While he was not an official catechist, this did not stop his desire to spread the Gospel to all of creation.

He eventually left his village and moved to a larger city where there were more Catholics. Bakanja sought work from a Belgian company and quickly discovered that they hated Catholicism as much as they despised the native African people. He asked permission to go home and was immediately refused.

One of the agents especially did not like that Bakanja always tried to preach to his fellow workers. He said, “You’ll have the whole village praying and no one will want to work.” The agent demanded that Bakanja throw away his scapular, and when he refused to do so, the agent had him flogged.

The agent flogged him not once, but twice and during the second flogging used a whip with nails at the end of it. Bakanja received over 100 blows and it left him nearly dead. However, since an inspector was due to arrive the agent sent Bakanja away. He was barely able to walk and hid himself by the side of the road until he saw the inspector.

Horrified, the inspector later wrote about what he saw that day, “I saw a man come from the forest with his back torn apart by deep, festering, malodorous wounds, covered with filth, assaulted by flies.” The inspector prevented the agent from killing Bakanja, but it was too late.

He survived for another six months, but in total agony, praying each day and offering his suffering to God. Bakanja told the missionaries who came to give him the Last Rites that he already forgave his attacker, promising prayers for his soul, “Certainly I shall pray for him. When I am in heaven, I shall pray for him very much.”

He died on August 15, 1909 with a rosary in his hand and wearing the Brown Scapular.

Pope John Paul II beatified him on April 24, 1994 and had the following to say about him.

In an Africa that is sorely tried by ethnic strife, your shining example is an encouragement to harmony and reconciliation among the children of the same heavenly Father. You showed brotherly love to all, without distinction of race or social class; you earned the esteem and respect of your companions, many of whom were not Christians. Thus you show us the necessary way of dialogue among men.

Read more:
Venerable Henriette Delille, a Catholic woman of color on the road to sainthood

Read more:
This hairdresser slave is on the way to canonization