Early Qur’an manuscript found to be written over the Bible 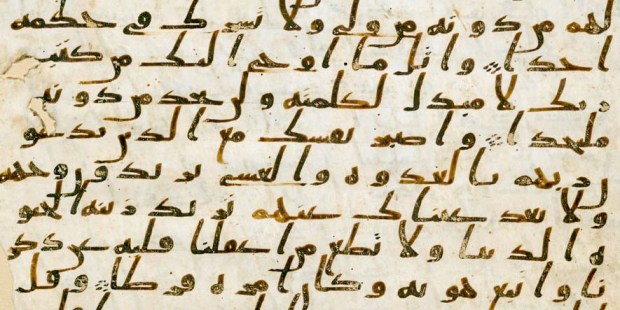 Behind the Arabic script, evidence of Coptic lettering from the Old Testament.

French scholar Dr Eléonore Cellard was looking through the current catalog of Christie’s auction house when she came across an old, weathered page of the Qur’an. Cellard quickly realized that this was not an ordinary manuscript but a palimpsest, a manuscript in which the original text had been effaced to make room for later writing, when she noticed that behind the clear Arabic script were faint impressions of Coptic lettering.

Cellard informed Christie’s of her discovery and the auction house’s team of specialists were able to identify the ghostly writing to be from the Old Testament’s Book of Deuteronomy. The Guardian reports that Christie’s manuscript specialist Romain Pingannaud was especially excited by the discovery:

“It’s quite extraordinary. Once you know it’s there, you can only see it, it becomes so obvious. We missed it at the beginning. It’s fascinating, particularly because it’s the only example where you have an Arabic text on top of a non-Arabic text. And what’s even more fascinating is it is on top of passages from the Old Testament … It shows the contact between communities in the first centuries of Islam; it’s very relevant.”

Pingannaud believes the manuscript dates back to the 8th or 9th century A.D., based on the style of the Arabic writing as well as historical knowledge of the Arab conquest of Egypt, which took place at the same time. Egypt was also home to the Coptic community at this time, which accounts for the presence of both languages.

They have yet to determine when the Coptic letters were written. Pingannaud will not be conducting carbon 14 tests to determine the age of the text, he explained, “Carbon 14 testing would date only the material, not the writing, but it’s quite destructive and these folios are too thin,” he said.

According to Christie’s there have only been a handful of Qur’anic palimpsests discovered, and of the examples they have, none have been written over Christian text. Considering it is traditional to write the Qur’an on fresh paper, it seems a mystery as to why a manuscript page from the Bible was used. Pingannaud suggests that at the time of the Arabic writing, the page would have looked clean and new:

“Parchment is very strong, it doesn’t suffer too much – it’s sensitive to humidity but very solid,” he said. “At the time it was erased the parchment was probably like new and it’s only with centuries passing that the ink which sank into the parchment provides this ghost image we see.”

The fragments of the manuscript, which Christie’s classifies as “extremely rare,” are currently up for auction with a guide price of £80,000-£120,000.