Alfie Evans dies, after a week without vital support 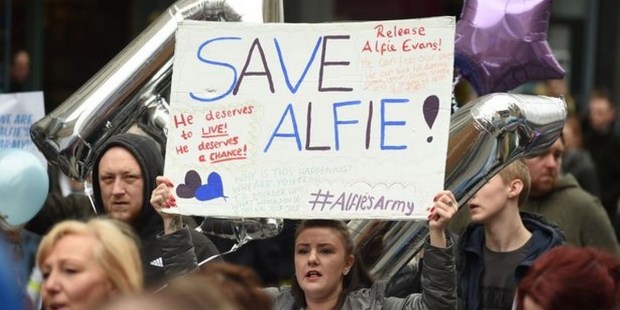 His father, Tom Evans, shared the news on Facebook

Alfie Evans, the 23-month-old toddler with a degenerative brain condition, whose case sparked not only a High Court legal battle but also a wave of solidarity around the world, has died, nearly a week after his life support was withdrawn.

His father, Tom Evans, shared the news on Facebook that his son had passed away at 2:30 a.m. local time in Liverpool:  “My gladiator lay down his shield and gained his wings… absolutely heartbroken.”

As his parents, Evans and Kate James, opposed the medical decision to withdraw the life support that kept the toddler alive, Alfie resisted without mechanical ventilation for almost a week, while his parents exhausted all legal possibilities to get him out of Britain and treat him at the Bambino Gesù Hospital, linked to the Holy See.

The case drew international support, including that of Pope Francis, who repeatedly asked that “their desire to seek new forms of treatment may be granted.”

On Saturday, he tweeted: “I am deeply moved by the death of little Alfie.”

I am deeply moved by the death of little Alfie. Today I pray especially for his parents, as God the Father receives him in his tender embrace.

The Pope added: “Today I pray especially for his parents, as God the Father receives him in his tender embrace.”

Read more:
For Alfie Evans: Listen to this song actor/producer Eduardo Verastegui dedicated to his “#1Hero”

A statement from Alder Hey Children’s Hospital in Liverpool, where Alfie was taken off a ventilator on Monday, said staff expressed their “heartfelt sympathy.”

“All of us feel deeply for Alfie, Kate, Tom and his whole family and our thoughts are with them,” the hospital said. “This has been a devastating journey for them.”

On Thursday, Evans issued a statement after a contentious battle with the hospital and the courts, that he and his wife now wanted to build a bridge with the institution and develop a new treatment plan for the toddler. Evans and James wanted to bring their son home, but that was not to be.