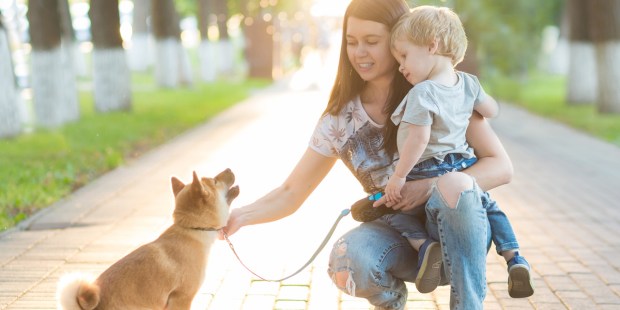 Let’s delight in the fact that boys need activity and connection to release the anxiety of stressful days.

Every day when my kids get home from school, I send them to change out of their uniforms and hang them up. Inevitably, my two boys have a wrestling match in their room. Sometimes it’s good-natured, just letting off steam. Other times it’s a flat-out brawl over who gets to open their dresser drawer first. But it’s consistent — every afternoon, without fail, they start in on it until I separate them and make them get changed.

Usually this is accompanied by a mini-lecture about obeying or treating each other kindly, depending on what kind of brawl is happening. Sometimes I don’t have the energy for moralizing and I just pull them apart, tell them to change, and enforce obedience with the sheer power of my mom glare. But what I never do is let them get it out of their system — not even when they’re just horsing around.

When our dog has had a stressful day — whether because the kids are loud and chaotic or the thunderstorms scare her — she always has to blow off a little steam. She’ll run around the yard and bark at the birds, chase lizards, wrestle with her bed, or beg someone to play tug-of-war with her. I know that she’s not being disobedient, she just needs to work that tension out of her system, so I never chastise her. On the contrary, I’m usually patient and often highly entertained by her antics.

I thought about this disparity when I read a recent New York Times article by a clinical psychologist about the way boys in our culture are treated — particularly young boys, like my two sons:

After a long car trip we consider it natural for a puppy to “grumblebark,” run in circles, maybe even nip a bit. We don’t get mad at him for needing to shake off that energy. We ask, “Who’s a good boy?” in a tone that the dog understands perfectly. It means, “I’m delighted with you simply because you exist.”

Contrast that with the way we treat children after they have been similarly cooped up in a day of classes, activities and homework. We bark instructions at them: Finish your math problems — and make sure you show your work! Put away that iPad! Get ready for bed!

Rather than delighting in their company, we corral and command them.

This is particularly challenging for young boys.

The psychologist, Wendy Mogel, explains why young boys are hit harder by a day full of structured activities and sedentary work, and it’s familiar territory. School curriculums have ramped up, expecting more work from kids at younger ages. Girls can generally cope with the increased demands because it works to their advantage, given that they develop verbal, social, and academic skills earlier than boys.

Boys struggle. They need to be active, and the confines of early and excessive academics create more stress and anxiety for them, leading to an increased need for physical activity and parental communication and connection. According to Mogel, she often sees clinical anxiety in boys at this age as a direct result of their “energy, imagination, and passion turned inward, against themselves and against their family’s peaceful home.”

She has several concrete suggestions for reversing this trend and giving our sons the support they need to offset an increasingly stressful academic setting. Some of them are obvious, like letting him get more physical activity and removing highly structured after-school activities. But the two that caught my attention were even more obvious, even more simple: be enchanted with his enchantment, and cherish him.

The thing is, it’s not that I don’t delight in doing these things with my sons. I do. I’ve just fallen into the mindset of structure and schedules, where there’s always something else to do to move the day and night along.

I’m going to change that, starting today. The hour after school is no longer for immediate homework … it’s for blowing off steam and spending some time connecting with my children. It’s time to stop corralling and start cherishing, to stop talking to them like small adults and start talking to them like overgrown puppies — not with condescension, but with delight.