Archaeological dig reveals what may be the oldest church in Copenhagen 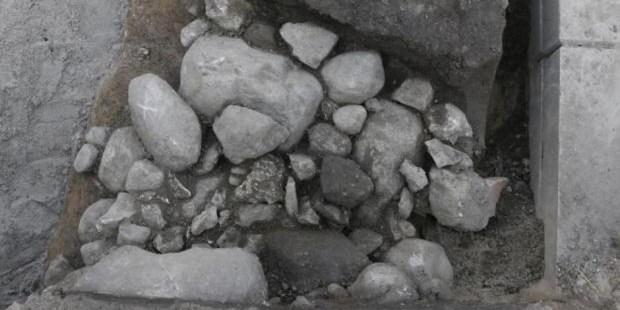 This find may show that Copenhagen was much larger during the Middle Ages than previously believed.

An archaeological dig in Copenhagen led to the discovery of 30 skeletons of men, women, and children who lived in the Danish capital 1,000 years ago.

The excavation, which began in February, started under a bus stop in the Town Hall Square (Rådhuspladsen), revealing that the city center was built over an ancient graveyard. The initial dig found 20 skeletons and in the following months 10 more were found.

Science Nordic reports the dig has now exposed a portion of stone wall which authorities believe may have been the foundation for the oldest church in Copenhagen. Lars Ewald Jensen, head of archaeology at the Museum of Copenhagen, Denmark, spoke to Science Nordic:

“If it is a church then it supports the idea that Copenhagen was an established city at the start of the Middle Ages,” Jensen continued, “You can have a grave yard without an established city, because you need more elements in place before you can call it a city. But conversely, you cannot have a city without a church,”

From the way the bodies were buried — in a row, side by side, laid at the same level — it is clear that this was an established graveyard, and not a random mass grave. As archaeologists dig further they will attempt to determine how big the graveyard was and if there was indeed a church connected to it.

Stine Damsbo Winther, archaeologist at the Museum of Copenhagen, commented, “We hope that we’ve discovered the foundations of a church building. In this case, it would be older or perhaps was around at the same time as St. Clement Church (Copenhagen), which was excavated in 2008. And we could potentially have discovered the oldest church in Copenhagen.”

While this is exciting, the archaeological team at the site believe that this wall may just be a border of the graveyard. This however may be unlikely since they discovered several skeletons on the opposite side. The skeletons are awaiting DNA analysis, which may give the team the answers they’re looking for.