Why doesn’t Daddy go to church with us, Mommy? 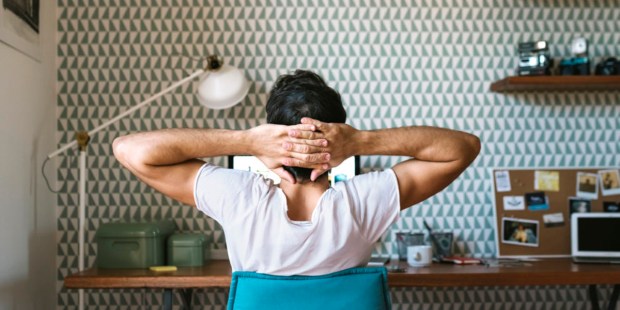 How to answer this sensitive question in a way our children can understand while still respecting our spouses.

“But why doesn’t Daddy have to go?” my daughter Paige asked. This question was coming up almost every Sunday morning as I tried to hustle my kids out the door to Mass. They saw my husband leisurely relaxing on the couch and were jealous. “Why does he get to stay home?” Paige whined. Sigh. How to explain to them that Dad doesn’t practice our religion? That he doesn’t have any religion at all? I struggled to find the right way to put it. “Daddy wasn’t raised Catholic and didn’t grow up going to church like we do,” I said to my daughters, ages 7 and 10. “But will he go to hell?” my older one asked. Yikes. This was getting complicated.

When we began dating, I quickly realized that Rich wasn’t a religious person. He was baptized in the Protestant faith, but his family never went to church. He has a scientific way of approaching the world and is way more evolution than creation. My faith has always been very important to me, so when we got serious, I made sure that my future husband was okay with me raising our children in the Church. Rich assured me this would be fine, but that he wanted nothing to do with it for himself. Good enough, I thought. At least he isn’t against my religion.

Fast forward 15 years, three children, and a move to the suburbs: going to church by myself in New York City was one thing. Going to church with three children in a church full of families is another. I really dislike not having my husband by my side for what, to me, should be family time. I feel like my kids see all the other dads in church and deserve for theirs to be there, too. I’ve asked Rich if he would join us for church each week, and he adamantly refuses. “What’s one hour out of the week?” I’ve said to him. I feel like he should be willing to sacrifice that for me, for our children. But I’ve had no luck changing his mind, and I know I’m not alone in this struggle.

Before the 1960s, about 20 percent of married couples were in interfaith unions; but of couples married in this century’s first decade, it’s 45 percent, according to Naomi Schaefer Riley, author of ’Til Faith Do Us Part: How Interfaith Marriage Is Transforming America.

In 2010, Riley commissioned the polling firm YouGov to conduct a nationally representative survey of 2,450 Americans, adjusted to produce an oversampling of couples in interfaith marriages. It found that such unions were becoming more common, without regard to geography, income, or education level.

So how can those of us in this situation try to convince our non-practicing spouse to attend church services? “The same way we get our spouse to do anything,” says author and therapist Dr. Gregory Popcak. “We explain how important it is, we insist that we be taken seriously, and we refuse to let it go.” Popcak is the executive director of the Pastoral Solutions Institute, an organization dedicated to helping Catholics find faith-filled solutions to tough marriage, family, and personal problems. He’s written more than a dozen books integrating Catholic theology and counseling psychology, including Discovering God Together: The Catholic Guide to Raising Faithful Kids.

“Research on couples who experience faith differences shows that when there is conflict about church, it rarely has anything to do with religion,” he says. “It is all about respect. Respect involves more than being nice to each other. Ultimately, it involves trying to see the truth, goodness, and beauty in all the things the other person finds true, good, and beautiful. Couples who manage faith differences well usually don’t see eye-to-eye on religion, but they work hard to try and see what their partner finds good, true, and beautiful about their beliefs and religious practices.”

Modeling respect and generosity in every aspect of the relationship, not just religion, is the key, stresses Popcak.

Deacon Doug Kendzierski of the Archdiocese of Baltimore, who’s been married for 27 years and has three grown daughters, echoes this advice, saying honest communication is key. “Suppressing priorities and feelings is not only dishonest, but ultimately harmful. At the same time, a good relationship is not about ‘convincing,’ it’s about explaining and understanding,” he says. “You should be honest about the importance of the family unit at church (i.e. public unity, example for your children, supporting you, togetherness, etc.). Be careful not to be judgmental, merely open and honest about the effect on you, and your concerns regarding the potential impact on the children and the family. Beyond that, prayer is the most effective approach; don’t discount the power of prayer.”

It certainly sounds like good advice, and I intend to try it — and to keep praying that my spouse has a change of heart.

But what about spouses who have their own strong beliefs and practice a different religion? The same principles apply, says Popcak. “You need to model open dialog about each other’s faith, showing that same respect I spoke of. Go out of your way to try to share in whatever faith activities you feel comfortable sharing in and dealing openly, honestly, and respectfully with differences.” And each parent should be responsible for communicating his or her own faith experience to the kids. “I say this because it is not unusual for the more faithful parent to try to expose the kids to both faiths to be ‘fair,’ even if the other parent is minimally religious,” says Popcak.

So what to tell my own children when they ask why Daddy doesn’t go with us to church? “Children need to understand, first and foremost, that this is not a reflection of Daddy’s love or commitment to them, to mommy, or the family. And that Daddy is an adult and God lets adults make choices about how they spend their time,” says Kendzierski. “Remind them of the attention and time Daddy does provide and encourage your children to have an open and honest relationship with Daddy, too, but not to ‘nag’ him about this. Most of all, remind your children to pray always for Daddy — and for you — because grown ups need to be reminded by God of what’s most important.

“Then use this conversation to segue into talking with the kids about whether and how they have experienced God’s love.”

If your kids struggle to articulate it, or seem awkward talking about it, the faithful parent should assume they have some work to do in facilitating a more meaningful relationship between their children and God, says Popcak.

I can’t wait to sit mine down and find out what they have to say. Hopefully bringing them to church all these years — even though it’s just us — has led them to develop their own special relationship with God. I know I appreciate having them there by my side in church. And I’m not going to give up on trying to get their dad to join us.

According to the United States Conference of Catholic Bishops’ website ForYourMarriage.org:

Read more:
The incredible mission a father has in the lives of his children