EXCLUSIVE PHOTOS: St. Francis is alive and well and living in the South Bronx

See how a group of Franciscan Friars helped bring the South Bronx out of the ashes.

The year was 1977. Sportscaster Howard Cosell, viewing the fires that raged just outside the walls of Yankee Stadium during Game 2 of the World Series, uttered the infamous words, “There it is, ladies and gentlemen, the Bronx is burning.”

Throughout the 1970s the South Bronx became a symbol of everything that was wrong with society, and itself turned into a living hell complete with towering flames at night and clouds of jet black smoke by day that could be seen clearly from across the Hudson River. Rampant homelessness, street gangs, plummeting property values and a wide-scale drug endemic were plunging the borough into a pit of despair and hopelessness that seemed insurmountable as New York City itself descended into near bankruptcy.

The NYPD’s famous 41st Precinct, nicknamed “Fort Apache,” was one of the last lines of defense against complete collapse, as the South Bronx claimed the ominous title of the rape, murder and robbery capital of America. The FDNY, overwhelmed with fire calls, heroically fought the fires they could, and at times wouldn’t even return to their stations between shifts.

By the early 1980s, approximately 45 percent of the properties were either burnt to the ground or abandoned and the conditions were so abysmal that there was only one way left to go. Up.

In early 1987, a priest named Fr. Benedict Groeschel, of the newly founded Franciscan Friars of the Renewal, sat in a car with a woman named Nancy Black on 156th Street near the FDNY’s Ladder 55 Station, in front of what was then St. Adelbert’s Church. The two prayed that the group of eight founding members of the religious order would be able to set up shop to begin their ministry in the crumbling building. Their prayer and the prayers of countless others were heard and answered, and by late 1987 the Franciscan Friars of the Renewal had themselves a new home, in what is now the St. Crispin Friary. 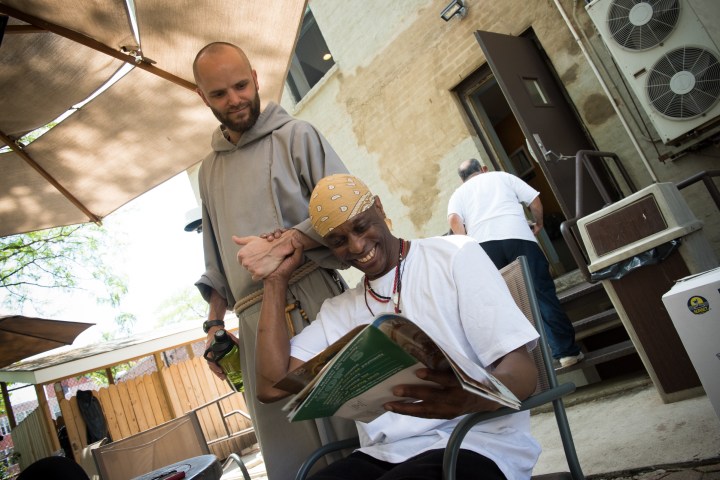 They opened their doors and their hearts to the local community serving the homeless, counseling drug addicts, distributing food and teaching the children who found their way to their door [1].

Father Glen Sudano C.F.R., one of the earliest members, recalled the first Christmas at the friary. “I was given the task of setting up the creche,” said Fr. Glen, “I was excited that I found the creche, and it was wonderful, and there was a camel, a wise man, and Joseph, and Mary, and where’s Jesus? … I looked everywhere but couldn’t find Him … so I set up the creche with the camel and Joseph and Mary, and turned them around so you could just see their backs … and not see Jesus Bambino who’s AWOL. At that time the men started coming in (to the shelter) and a man came in and said “It’s just beautiful!” … I said ‘I have a little something to tell you … there’s no Jesus.’… And the man said ‘Brother? Tonight you’re Jesus for me.’ Isn’t it curious, that we thought we were inviting Jesus, and yet they were seeing Jesus in us.”

A few years later the friars acquired a derelict building next door where you could go inside and “look right up and see the sky,” because the floors and roof were missing. In 1994, after lengthy repairs and renovation, the building opened its doors as the St. Anthony Shelter for Renewal, able to house 30 men.

And on Saturday June 16, 2018, the shelter celebrated its 25th anniversary of service, helping countless men rebuild their lives after struggling with homelessness and addiction.

At a time when the world recoiled in horror at what was happening to the northernmost borough of a city in crisis, the Franciscan Friars of Renewal, with their unbridled enthusiasm and stalwart reliance on the grace of God, brought their brand of renewal to the South Bronx and became a part of what turned the South Bronx around.

What began as an idea, a seed, planted deep in the soil beneath the ruins of a destitute neighborhood, watered with prayer and dedication, cooperating with the grace that burns through the clouds of challenge and adversity, was born as a tree of hope.

As Fr. Glen reflected at the end of the homily at the Mass, ”It begins with a seed, and remember, an acorn is a seed … and in every acorn is a mighty oak. Let us ask the Lord for at least 25 more years that this tree growing in the Bronx may deepen its roots, extend its branches and be a shelter for so many in need of mercy, pity and peace.”