On the Feast of the Assumption, hundreds of faithful journey to the site of the Rising of the Waters.

Our Ladywell Shrine, Dundalk, Co. Louth, Ireland, has been around since the early 1600’s appearing on maps dating from this time that mention it as a ”Holy well.” Every year on the eve of the Assumption, the waters are said to rise after midnight. Sometimes it happens at just after midnight but at other times it will happen the next morning.

This has been a landmark in my town since I was a young boy and I recall seeing the water rise and fill the entire courtyard. I’d say about a foot of water would be the end result within just a half hour of passing midnight.

Upon approaching the shrine I had arrived early but already there were people praying the stations of the Cross which is a popular prayer said by many of the local Catholics who visit the Shrine every year. One married couple informed me that for 40 years they’ve been coming to the Shrine and have never missed a year.

Another man who didn’t wish to be named told me that in the last storm that had passed Ireland, an enormous Oak tree came crashing down but just missed the shrine by inches. ”It took us an awful lot of time cleaning it up but we were happy the Shrine was intact” he said. 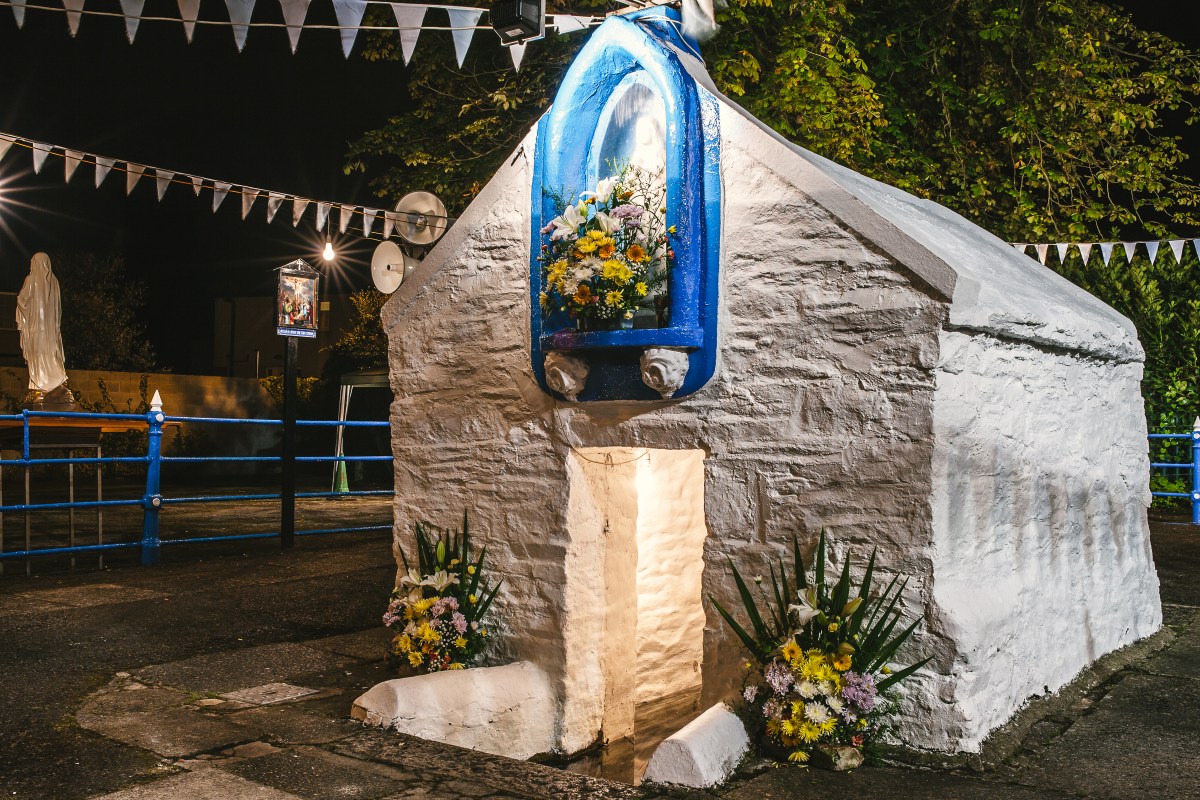 Surprisingly and at such a late time of night, many young people were at the shrine, eager to have their photo taken to be seen celebrating their faith to show it to the world. Whilst the light from within the shrine shone bright enough giving all the ability to fill their bottles with it’s Holy water blessed by the priest, an even greater light emitted from the souls of the young people who did not hide it under the tub of shame.

Walking around the shrine, there was a peculiar fragrance in the air. Some might have understood this fragrance to be the flowers of the local gardens but my soul was prompted by something to be of a different mind. Unworthy as I am, Indeed I couldn’t help but believe my own assumption (no pun intended) that I was being subjected to Our Lady’s presence.

Seeing a sudden commotion and people gathered around the shrine, I wondered what was taking place. I squeezed through the crowd as politely as is possible. Sitting down at the shrine people pointed me towards a frog which just sat there at the entrance facing inwards of the Holy well. He was the only frog who had come to pay his respects to the Queen of Heaven.

Before Mass was celebrated we were lead through a decade of the Holy Rosary. Following the Mass there was the blessing of the water at the well by Fr. Mark O’Hagan, Administrator and parish priest of St.Patricks Church in Dundalk.

I left the shrine with more than I’d expected. Although the water didn’t rise tonight, there was an atmosphere of joy that arose within every soul that made the pilgrimage, a joy that can only be attributed to the Holy Spirit via intercession of Our Lady.

As the crowds gathered around the Shrine many could be heard saying that ”we don’t come for the miracle, we come because of our faith”.

I left with those beautiful words still ringing in my ears more pleasing than the large Church bells on a sunny morning at the local parish Church. As the sun began to set upon my anxiety of not seeing the miracle, and all was calm again, emerging from out of nowhere were the words of the great apostle St.Paul who said: ”For we walk by faith, not by sight.” (Cor2:5:7).

Happy and Blessed Feast of the Assumption to all from Dundalk, Ireland.