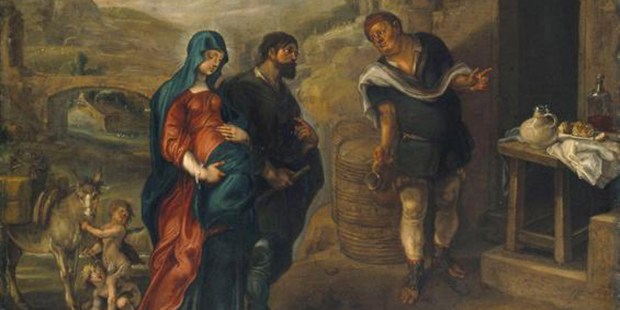 80 miles, 4 days … how many times did she have to stop for the bathroom?

This feast is a profound commemoration of what Our Lady and St. Joseph went through during the week preceding the first Christmas. (Today it is only celebrated in Spain, Italy, Portugal, and Poland, and among some religious groups.)

Have we ever thought about Joseph and Mary during this time? Have we ever tried to imagine how it was for them?

They were about to embark on an 80-mile journey to Bethlehem. There were no paved roads, cars, trains, planes, nor were their rest-stops along the way. They traveled along rocky, dirty, dusty paths.

Read more:
Biblical travel: How far to where, and what about the donkey?

I am sure most dads remember the birth of their first child. I know I do. I was 25 years old, and Loretta’s water broke on a Sunday afternoon. The journey by car over paved roads, across the George Washington Bridge and into Manhattan, took 20 minutes.

When we arrived, she was immediately taken to maternity and I was relegated to the waiting room. I was filled with massive relief knowing that my wife and soon to be born baby were in capable hands. I was not thinking about St. Joseph.

I will let you moms ponder how it must have been for the Savior’s mom. Although filled with grace and protected by God Himself, she was human with all the emotions and fears any normal woman would have. Those feelings were real.

As a man, I cannot imagine having to face the responsibility of taking my pregnant wife who was about to give birth on an 80-mile trek to get to a place without having any idea where we were to stay. The entire concept is, as we would say today, crazy! But for the chosen parents of the Messiah, that was their reality. They had no choice.

The journey would have taken Joseph and Mary at least four days.  Imagine all the stops along the way, especially with our Blessed Mother having a full-term baby leaning on her bladder. Yes, she was human.

They would have had to rest; but where? On the side of the road? They had to eat; did they start a fire and try to cook something? They had no Igloo coolers, so what did they use to preserve their food (whatever it was) and how much water were they able to carry? How many changes of clothing did they bring along? Where did they wash up? Where did they change their clothes?

When they reached Bethlehem, Joseph had to leave his worn out and pregnant wife, alone, in a strange place, and try to find shelter. We folks today just look for the first motel we see, pull in, sign in, and have a nice clean room with a warm bed waiting for us. It was not the same for the Holy Family; not even close. They wound up in a place that sheltered animals. This was Mary’s maternity center and her birthing room was a pile of hay. It is SO hard to imagine.

Read more:
One word to make the most of the last 10 days of Advent

We owe our Blessed Mother so much. She accepted God’s incredible gift of the Divine Maternity and all that followed; from seeing Joseph react to the initial horror at learning of her pregnancy, from the Bethlehem journey, to the First Christmas in a cave, and onward through His Passion and death … everything Mary did was a selfless act that came straight from the all-consuming Love that is in her Immaculate Heart.

As for St. Joseph—he is the exemplar role model for all of us, especially us men. He loves his God and his family and will do all in his power to care for and protect them, no matter what. That is what a real man does.

We followers of Christ are truly blessed. Why is it so many do not see that?