Call on these two saints to improve the mother-daughter relationship 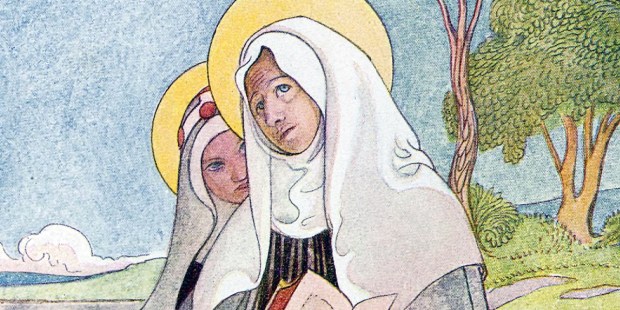 St. Bridget of Sweden (1303-1373) is known as the patron of her country and also one of the six patrons of Europe, along with Benedict of Nursia, Sts. Cyril and Methodius, Catherine of Siena and Edith Stein. She is the founder of the Brigittines, and known for her mystical experiences and prayers, many of which focus on the Passion of Christ.

Bridget and her husband had a 20-year, happy marriage until his death, when she was in her 40s. They had eight children, four boys and four girls. Catherine was the second.

St. Catherine of Sweden was also married, but she and her husband lived in continence.

Mother and daughter braved the plague to make a pilgrimage to Rome in the Jubilee Year of 1350.

Read more:
6 Women entrepreneurs who are making a difference in the world

One of the things St. Bridget is most known for is prayers to honor the number of blows that Jesus received during his Passion. He revealed to her that he had received 5,480 blows. “If you wish to honor them in some way, recite fifteen Our Fathers and fifteen Hail Marys with the following Prayers, which I Myself shall teach you, for an entire year. When the year is finished, you will have honored each of My Wounds,” he told her. (Fifteen times 365 is 5,475.)

These prayers became regular features in Books of Hours.

Read more:
In the Middle Ages every Christian who could afford one had a Book of Hours

Both mother and daughter are celebrated on July 23. While they make wonderful patronesses for mothers and daughters alike, St. Catherine is also called on for the avoidance of miscarriage.

Read more:
Pray this night prayer of St. Bridget for peace of heart

Read more:
Discover the “secret to happiness” with these powerful prayers of St. Bridget