Why do cardinals put their title in the middle of their name? 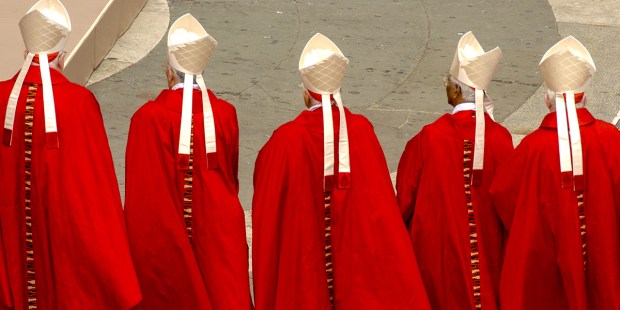 The tradition is unique among members of the hierarchy and can be traced to an early Roman practice.

Often when a Catholic cardinal is addressed, his title is put in the middle. For example, “Timothy Cardinal Dolan” is often seen at the end of official announcements or letters, and when being formally addressed at a banquet or Church function it is “His Eminence, Timothy Cardinal Dolan.”

This is unique, as bishops and the pope are both addressed with their title coming first, such as “Pope Francis.”

The reason behind this peculiar custom dates back a tradition that started in Rome. From the very beginning of the Church, cardinals were exclusively members of the hierarchy who were given charge of specific churches in Rome. Even today when a cardinal is appointed, they are typically given charge of a church in the city of Rome, even if they live thousands of miles away.

Keeping this in mind, early on in the Church surnames (aka, “last names”) did not exist. In order to distinguish members of the hierarchy, they would instead refer to them by the church they were in charge of.

In the earliest days of the College [of Cardinals]’s development, when these holy men served the bishops of Rome as priests of the original parish churches of Rome and as the pope’s special advisors, the use of a surname was not customary because no one actually possessed one. As such, a priest of Rome took the title of his Church to properly distinguish himself from another with the same first name.

Noonan further ads, “For instance, he would properly be called ‘John of St. Clementus’ to distinguish himself from ‘John of Santa Maria’ … This ancient form has remained for eighteen hundred years.”

This tradition was also kept among most royalty during the medieval ages, as the title and territory always came after the baptismal name (such as Carlo II, Prince of Genoa). In time, as surnames developed, these replaced the name of the cardinal’s titular church, but the order remained the same.

During the past 30 years this custom has been relaxed during informal situations, as most refer to cardinals by putting the title first (Cardinal Timothy Dolan). This is not an official change in how cardinals are addressed, but merely a product of the current culture.

Much of what the Church does can be traced back hundreds of years and has a rich history behind it that is fascinating to learn.

Read more:
What is the difference between an archdiocese and a diocese?