Did you know St. Martha became a dragon-slayer? 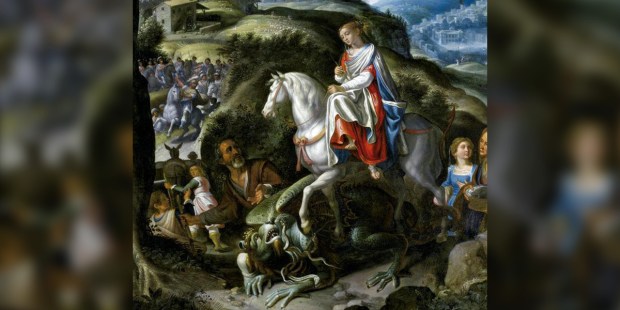 Sweet Martha, who ministered to Jesus’ needs, turned out to be one tough woman!

During his three years of earthly ministry Jesus often stayed at the home of Mary, Martha and Lazarus. They were some of his most intimate friends and were also his devoted disciples.

Nothing is mentioned about them in the Bible after Jesus’ ascension into heaven, but local legends reveal some interesting stories.

While the Eastern Orthodox claim that Martha and Lazarus ended up in Cyprus, Latin traditions claim they went to France with Mary Magdalene.

Read more:
The adventures of Mary Magdalene after Jesus’ resurrection

Once there, Martha was immediately sought after for her association with Jesus. According to tradition, she performed many miraculous feats, including the slaying of a dragon along the Rhone river. The Golden Legend provides all the details.

At that time, in the forest along the Rhone between Aries and Avignon, there was a dragon that was half animal and half fish, larger than an ox, longer than a horse, with teeth as sharp as horns and a pair of bucklers on either side of his body. This beast lurked in the river, killing all those who tried to sail by and sinking their vessels … The people asked Martha for help, and she went after the dragon. She found him in the forest in the act of devouring a man, sprinkled him with blessed water, and had a cross held up in front of him. The brute was subdued at once and stood still like a sheep while Martha tied him up with her girdle, and the people killed him then and there with stones and lances.

While this may seem like a bizarre story that is the product of medieval mythology, there is a distinct possibility that St. Martha (or some other saint) did in fact discover a stray crocodile. The description of a scaly beast who lives both in the water and on land appears to fit the description perfectly. It’s possible that someone was transporting a crocodile to a Roman amphitheater and it somehow escaped the boat, finding refuge in the marshland around the Rhone river.

Whenever a saint (such as St. George) is credited with slaying a dragon, crocodiles appear to be the most likely candidate (or an ancient dinosaur, whichever one you prefer).

With this in mind, imagine sweet Martha, who ministered to Jesus, wrestling a crocodile and tying it up with her girdle!

It certainly gives you a new perspective on this biblical character if any of the stories are true!

Read more:
How a fierce demon was defeated by a simple teenage girl