Why are there unicorns in the Bible? 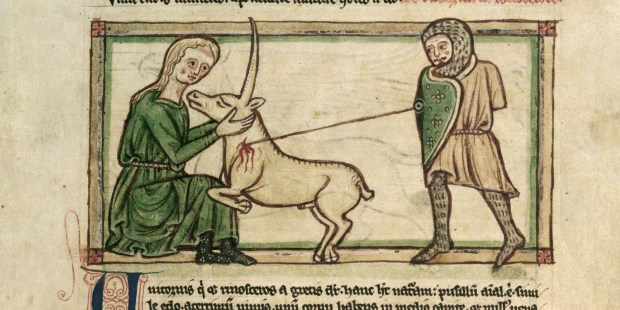 A matter of translation ended up weaving a unique Christian iconographic tradition.

The church of St. John the Evangelist in Ravenna, Italy, was commissioned by the Empress Placidia in the year 424. The story goes that while she was traveling across the Adriatic Sea to reach Ravenna, in order to assume the government of the Western Roman Empire on behalf of her son, Emperor Valentinian III, a heavy storm broke out. The empress, who was traveling with her son Placidus and her daughter Iusta, prayed to St. John, asking him to carry them safely to Ravenna.

To this day, at the door of the church, one can read the inscription in marble: “Gala Placidia, along with her son Placidus Valentinian Augustus and her daughter Honoria Iusta Gratia Augusta, paid their vows for being released from the perils of the sea.”

The basilica today, however, is far from what it was in Gala Placidia’s times: the first expansion of the central aisle of the basilica dates from the 7th century, but this was just the first of many other renovations made by the Crusaders in the 12th and 13th centuries. Further additions were made in the 17th century. And in the 20th century, after Allied bombers mistakenly destroyed the west façade almost in its entirety, the basilica had to be rebuilt, using the original materials that were scattered around the place.

One of the 13th-century renovations was responsible for bringing a unicorn into the building. A series of mosaics, originally added to the floors of the basilica, were commissioned by Abbot William in order to commemorate the Fourth Crusade, including the reconquest of Zara and Constantinople. But among these historical scenes are pictured many figures from both mythical and medieval folklore, our unicorn included. But what can a unicorn and Christianity have in common?

Everything could be a matter of mistranslation. Unicorns, difficult as it is to believe, are mentioned in the Bible. Moreover, not one, nor two, but nine times in total, in some translations. Most biblical scholars point out that this is a mistranslation of the Hebrew word re’em, which means “ox” or “buffalo.” Some others point out that this re’em instead refers to a rhinoceros, as the beast is described in the Bible as an incredibly strong animal. Interestingly, there are one-horned rhinos, which would make the presence of the unicorn-re’em beast in the biblical text something a little more consistent.

Translation aside, the fact is that the unicorn, being a mythical figure, found a place of its own in Christian iconography, to the point of becoming a Christological symbol. Strange as it may seem, the unicorn is considered to be an image of Christ in medieval iconography. But why?

A medieval legend, based on the Physiologus (a text of the 2nd century after Christ, written by an anonymous Alexandrian author), describes the unicorn as an animal impossible to capture by anyone but a virgin. Attracted by the purity of an immaculate maiden, the unicorn would sleep in her lap. Only there could the hunters catch him. The legend was understood and read by Christian exegetes as an allegory of the Incarnation of Christ: the Creator of the Universe, impossible to contain, makes himself human and vulnerable in the womb of Mary immaculate.