Excavation at Mt. Zion yields evidence of the biblical razing of Jerusalem 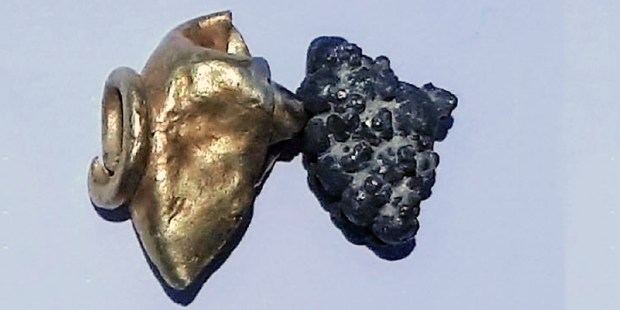 Artifacts suggest the Bible is accurate in its description of First Temple-era Jerusalem as a land of riches.

Archaeologists working at a site on Mount Zion have unearthed evidence that Iron-Age era Jerusalem was much larger and wealthier than previously thought. Also found were artifacts and ash layers that support the biblical account of the Babylonian conquest of Jerusalem about 2,600 years ago.

Ruth Schuster from Haaretz reports that the artifacts are in the form of small, finely worked gold and silver jewelry. The gold is in the shape of a bell or a bowl and seems to have been made to contain the silver piece, which was forged in the shape of a bundle of grapes. Experts believe that these are fragments of a much larger ornament.

The items are believed to have belonged to someone aristocratic, as it is assumed that any commoner in possession of such precious metals would never leave them behind. The materials and craftsmanship suggest that Iron-Age Jerusalem was a place of great wealth, which supports the accounts in the Bible.

Found along with the jewelry were Scythian arrowheads, the common choice of 6th- and 7th-century Babylonians. Archaeologists are piecing the clues together and hypothesize that these foreign arrows were deposited during the Babylonian conquest of Jerusalem. This perhaps   explains why the precious metals were left behind — their owners fled in haste to avoid said arrows.

Shimon Gibson, professor at UNC Charlotte, noted that taken on their own, each piece of evidence could mean any number of things, but together they begin to tell the tale. He told Haaretz:

“… in this case, the combination of an ashy layer full of artifacts, mixed with arrowheads, and a very special ornament indicates some kind of devastation and destruction. Nobody abandons golden jewelry and nobody has arrowheads in their domestic refuse.” He added, “It’s the kind of jumble that you would expect to find in a ruined household following a raid or battle.”

Jewish history expert Elon Gilad explained to Haaretz that between biblical records and archaeological evidence, we have a clear account that around 587 BC the Babylonians laid siege to Jerusalem, broke through the gates, plundered and burned the first Temple, and — as suggested by this new evidence — went on to burn the greater city.

In the tenth month of the ninth year of Zedekiah’s reign, on the tenth day of the month, Nebuchadnezzar, king of Babylon, and his whole army advanced against Jerusalem, encamped around it, and built siege walls on every side. The siege of the city continued until the eleventh year of Zedekiah.

On the ninth day of the month, when famine had gripped the city, and the people of the land had no more food, the city walls were breached. That night, all the soldiers came to the gate between the two walls near the king’s garden (the Chaldeans had the city surrounded), while the king went toward the Arabah. But the Chaldean army pursued the king and overtook him in the desert near Jericho, abandoned by his whole army.

The king was therefore arrested and brought to Riblah to the king of Babylon, who pronounced sentence on him. They slew Zedekiah’s sons before his eyes; then they put out his eyes, bound him with fetters, and brought him to Babylon.