Ox, eagle, lion, man: Why and how are the Evangelists associated with these creatures?

One of the most common motifs of Christian art is the almost omnipresent Tetramorph. From the Greek tetra (“four”) and morphé (“form,” or “shape”) the word applies, in general, to any representation of a set of four elements.

But in Christian art, the Tetramorph refers almost exclusively to the most common way to depict the four Evangelists, each one of them either accompanied or represented by a figure, three of them being animals and only one (the one that either accompanies or represents Matthew) human or, more often than not, a winged angelic figure.

Read more:
What does St. John the Evangelist have to do with wine and snakes?

Such images, unlike some other traditional zoomorphic motifs of Christian art, have biblical bases. They correspond to the vision of the so-called “four living beings” of Ezekiel: the prophet describes four beings: “As for the appearance of their faces: the four had the face of a human being, the face of a lion on the right side, the face of an ox on the left side, and the face of an eagle” (Ezekiel 1:10). This tetramorph bore the throne or chariot of the Lord.

One can only wonder where Ezekiel got such complex images from.

We all know the combination of different beings and symbols was quite common in ancient Egypt, as well as in ancient Mesopotamia. Let us remember the Egyptian sphinxes, winged Babylonian bulls and Greek harpies. Interestingly Ezekiel himself was one of the Jewish prophets who lived during the exile in Babylon around the 6th century before Christ, so his vision could have been influenced (Bible scholars claim) by the ancient motifs of Assyrian art, in which these combinations were indeed quite common.

Read more:
Why are there unicorns in the Bible?

The Revelation of John (that is, the book of the Apocalypse) echoes the vision of Ezekiel in its fourth chapter: “And the first beast was as a lion, the second beast as a calf, the third beast had the face of a man, and the fourth beast was like an eagle.”

Now, why are these creatures assigned to a specific Evangelist? Why is the eagle paired with John, for instance? There are compelling and convincing reasons, associated with the particularities of the Gospels of each author, according to St. Jerome. Look for these four symbols in pictures of the Evangelists, or by themselves decorating the front of Gospel books and pulpits. 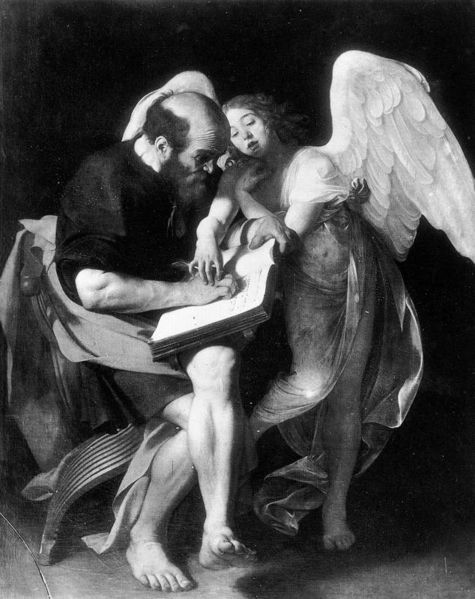