Heartwarming photo of elementary schoolboys is a lesson for us all 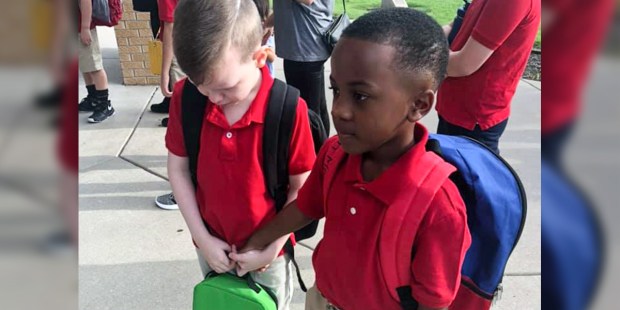 The now viral photo shows how one small gesture can make all the difference.

Returning to school is an overwhelming experience for most kids — and for quite a few parents too! So imagine if you’re a child with additional needs and the sound of that first bell ring fills you with anxiety. This was just the case for eight-year-old Connor Crites when he started back at Minneha Elementary School in Kansas, earlier this month.

Thankfully for Connor, who has autism, fellow pupil Christian Moore was on hand — quite literally — to save the day. Seeing Connor sitting on the floor outside school in tears, Christian went up to the second grader and tried to console him. He reached out his hand and accompanied an overwhelmed Connor into school. He had no knowledge of Connor’s autism; he just saw someone in need.

For Connor, a friend like Christian made all the difference to his whole back-to-school experience: “He found me and held my hand and I got happy tears,” the youngster explained to Kake.com. And this kind act has led to so much more, as Christian’s mom, Courtney Moore, also shared, the two have now developed an “inseparable bond.”

It’s a huge relief for Connor’s mom, April Crites, whose concerns for her son go way beyond those back to school jitters: “I fear every day that someone is going to laugh at him because he doesn’t speak correctly, or laugh at him because he doesn’t sit still or because he jumps up and down and flaps his hands.” Yet Christian’s gesture shows there are kids out there who don’t look at other children’s differences: they look to include others, they look to see how they can be of help.

The beautiful photo of the two boys was posted on Facebook and Christian’s mom’s response to those praising her compassionate son was simply one of gratitude: “I give thanks to God for blessing me with wonderful children! Blessings come in many forms and God enables us to be a vessel of love.”

As for Christian, well, he’s truly living up to his name and is an example to children and adults alike.

Read more:
This heartwarming story of a lonely 91-year-old vet and a young waiter has gone viral

Read more:
Catholic school awarded for implementing “full inclusion” for people with Down syndrome and autism