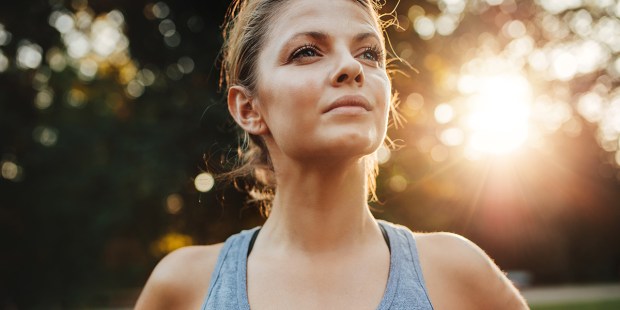 It certainly works for adults … and even works for teenagers.

She’s in 8th grade, and the team has been improving steadily all year. They’re good now, with flashes of greatness breaking through now and then. But like so many teams, when they fumble, they have a hard time rallying. One mistake is enough to arrest their momentum and shrink a 10-point lead to nothing in an instant. You can see it happen: two players hesitate — unsure of who called the ball first — and the ball hits the floor between them. Their faces fill with chagrin and embarrassment. Then one of them misses the next return, and someone else hits the ball into the net, and someone else misses a serve. The mistakes compound as their confidence, once shaken, shatters entirely.

But last night, something was different. The most obvious difference to me (of course) was Sienna. Instead of getting frustrated when a teammate missed a dig, she ran to them, high-fived them, and shouted encouragement to the rest of the team. Instead of getting angry with herself when she missed a serve or return herself, she clapped her hands once, set her shoulders, and got back into the game with renewed determination blazing on her face.

They lost the first set. Normally, the girls — and Sienna particularly — would have taken the court for the second set with a slump to their shoulders and an air of defeat. Instead, they came back on the court with an intensity we hadn’t seen before. Sienna was shouting encouragement and high-fiving before the set even started, and she kept it up even though they quickly gave up 10 points. Finally, one of the girls had a streak of solid serves and the whole team rallied, pulling off some pretty remarkable plays and coming from behind to win the second set.

The third set was neck-and-neck the entire time, with both teams fighting hard and pulling together. The other team won by 2 in the end, and of course, my daughter and her teammates were disappointed. For them, the sting of defeat was a little keener knowing just how hard they had fought.

For me, the entire game was a win no matter what the scoreboard said. In the past two years since Sienna started playing sports at school, I’ve watched her get in her head after every mistake, letting her own frustration defeat her in more profound ways than another team ever could. I’ve talked with her ad nauseam about rallying, shaking it off, taking a loss and making it a lesson, and every other sports maxim in existence. And for two years, I’ve watched her continue to get trapped in her own mistakes and frustration and feelings of failure and prayed for God to show her the way out, or send her someone who could.

Last night, I got to watch that prayer be answered in real time. I had no idea how it happened or where it came from, but seeing my daughter break through her own self-imposed barriers almost brought me to tears.

After the game, I told her how amazing it was to watch her encourage her teammates and herself. I told her I was so proud, and asked if something had happened that made this game so different.

“Well, since you and Coach are always telling me to be positive and encouraging and even when I try it never seems like enough, I decided to just fake it.”

She delivered this line with such teenage rebellion/resentment that it actually startled a laugh out of me.

“Wait … what? What do you mean, fake it?” I asked. She turned her head to the window so she could roll her eyes without getting in trouble before answering, “I just acted as encouraging and positive as I possibly could, no matter how frustrated I was. Since y’all want so much encouragement, I gave you all I had.”

“Okay,” I said slowly, “but did you notice the effect it had on your team?” She sighed and said, “Yeah. We never come from behind like that. And I usually don’t get better after messing up like that.”

I’ve been thinking about her seemingly unconventional strategy all day and realized that it’s not actually that unconventional at all. After all, there are days — many, many days — when the last thing I want to do is patiently listen to my 1st grader struggle through the words in his reading book. But I know how important it is that he learn to love reading, and I know he takes emotional cues from me so … I fake enthusiasm. And inevitably, a few pages in, that fake enthusiasm becomes genuine.

That’s okay, actually. In order for kids to learn lessons that stick, we have to let them learn in their own time, on their own terms, which is why my endless inspiration sports monologues made zero impact on Sienna. She had to learn the lesson I was trying to so hard to teach her not by hearing about it, but by experiencing it.

I have a strong suspicion that this is going to be the pattern of her teenage years. She’ll learn everything her own way, in her own time, and no interventions or discussions or stern parental edicts will change that. That’s kind of a terrifying prospect for a mom to face.

Luckily, I have my daughter’s good example to emulate. When she’s teenaging so hard that my blood pressure spikes, I’ll just slap a smile on my face and fake it till I make it.

Read more:
10 Attitudes that will make you more joyful