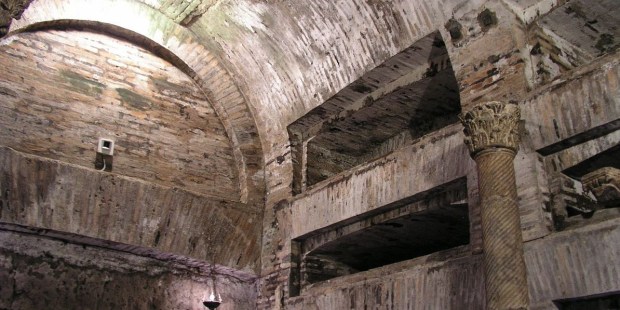 It is also known as “the Little Vatican.”

Along the Ancient Roman Via Appia, we find three catacombs. The first ones, the catacombs of San Sebastiano, run more than two kilometers long, and are distributed in four floors. There, several paintings from the early days of Christianity are still visible, along with graffitied stucco and mosaics. Also, the Basilica of San Sebastiano, built inside the catacombs, is one of the seven destinations for pilgrims visiting the Eternal City.

The second ones, the catacombs of Santa Domitilla, are home to more than 150.000 graves, also distributed in four levels, and extend for more than 15 kilometers underground. Its mural paintings are probably the most famous of all Early Christian Art. This is where the remarkable 3rd-century fresco of the Good Shepherd is found, for instance.

Read more:
The 12 most important symbols found in the Christian catacombs

But the third ones, the catacombs of Callixtus, are no doubt the biggest, longest, more intricate ones of these. Built sometime between the years 250 and 300, its galleries occupy more than 15 hectares, are longer than 20 kilometers, and go as deep as 60 meters underground.

These catacombs get their name from the deacon St. Callixtus, whom Pope Zephyrinus appointed as the administrator of this burial ground. In fact, it was Zephyrinus who turned these catacombs into the official cemetery of the early Roman Church. That is the reason why we find, in it, the famous “Crypt of the Popes.”

Referred to as “the Little Vatican,” this area once preserved the remains of 16 popes and 50 martyrs. Nine of those popes were buried directly in the Crypt of the Popes itself, including Pope Pontian, Pope Anterus, Pope Fabian, Pope Lucius I, and Pope Eutychian. But the “Crypt of the Popes” quickly filled up in the 4th century, so new popes had to be buried in nearby catacombs. We find the tombs of Pope Callixtus I and Pope Julius I in the Catacomb of Calepodius, those of Pope Anastasius I and Pope Innocent I in the Catacombs of Pontian, and that of Pope Boniface I in the Catacomb of Felicitas.