5 Ways to prevent a house fire 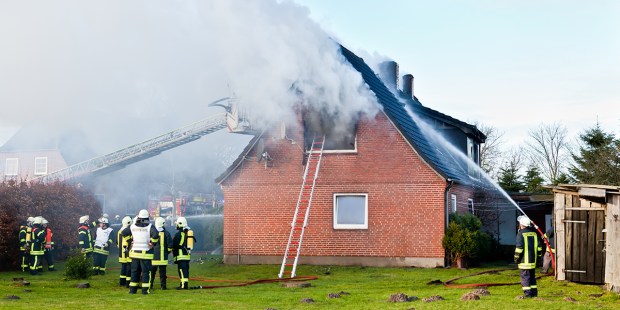 We’re spending so much time at home — here’s what I learned from my local fire department about staying safe.

I wasn’t expecting much from our recent tour of a local fire station. It was for kids and I figured my son would like it, but since it was a Saturday, the whole family went. I was pleasantly impressed at every turn.

When we arrived, I was struck immediately by how much of a family the group of firefighters at the station were. A fire station isn’t a museum, but a home. The fire fighters sleep and eat and work so much together that the camaraderie and companionship was palpable. And this made the tour even more enjoyable and engaging than I expected, which in turn made me more receptive to their advice on how to make my home safer.

That advice was by far the most important takeaway for me from the tour. Their stories opened my eyes to things I wasn’t aware of about fire safety. And given how much time we are all spending at home these days, I wanted to share the tips I learned with you.

1
Close bedroom doors all the way at night.

This was the biggest “to do” item they recommended we all do to give ourselves more time in a fire. They showed video footage of two rooms in the same house, where one bedroom door was closed all the way and one bedroom door was open during a fire. The room with the door closed suffered very little damage, while the room with the door open was destroyed. The horizontal plane that a closed door creates makes it much harder for flames to enter a room. Those extra minutes are crucial in giving the fire department time to work.

2
Put a carbon monoxide detector near the floor if you have kids.

3
Make sure you have a smoke detector that works on each level of your house.

If your garage is attached to your house, make sure you have one near your garage, too.

4
Teach your kids how to open the windows in their room.

If they are on the first floor then that will be an easy way to get out. But if not, at least they’ll be able to get people’s attention outside.

5
Throw things out of your windows so you are noticed.

The fire chief explained that when a fire truck comes onto a scene, one firefighter immediately walks around the perimeter of the building to assess the situation. Throwing stuff out of the windows — clothes, books, stuffed animals, toys, anything — will help get his attention so that he knows immediately where people are who need help.

When faced with the uncertainty of a situation that’s out of your control, like a house fire, it can be life-saving to have practical steps to take, just in case. One of the firefighters at the station explained what had helped when his own refrigerator caused a house fire one night. Hearing his story, and all the fire fighters’ advice, was eye-opening but comforting at the same time. Even though it’s scary to think about, having a plan is empowering. So check your smoke detectors today and close those bedroom doors tonight!

St. Florian, patron saint of firefighters and invoked against fires, pray for us!

Read more:
15 Parenting podcasts to help you and your family in self-isolation

Read more:
10 Activities senior citizens can do at home to boost their spirits