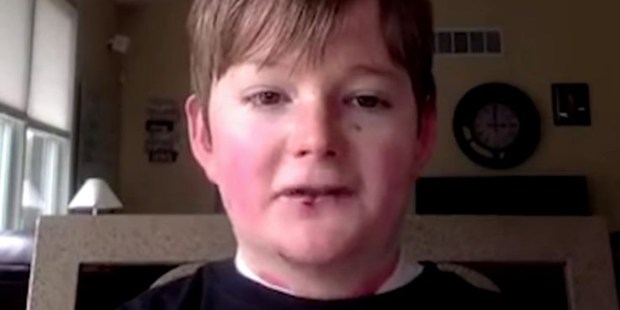 The inspirational Carson Kissell goes live every day to pray for the end of coronavirus, despite being in pain.

Carson Kissell recently turned 13 and takes the time to pray the Divine Mercy Chaplet every day for the end of coronavirus. While his devotion to prayer is impressive, his attitude and sacrifice is something that inspires anybody who joins the young man in prayer.

In an interview with Colm Flynn for EWTN, Kissell took some time away from his regular routine to talk about his online praying. And in the space of a few minutes the viewer can only be left in awe.

The 13-year-old shared how he suffers from a debilitating skin disease called Epidermolysis Bullosa. As Kissell eloquently explains in the video, the disease leaves him with very fragile what is  referred to as “butterfly skin.” Merely being on a swing can leave him with blisters.

Throughout the video you’re drawn to the happy demeanor of someone in regular physical pain: a young boy who finds taking a bath an agonizing experience; and who has to endure lengthy skincare routines. And yet he still doesn’t seem to complain but instead gets in front of his computer screen with a rosary held in his bandaged hand and prays for others.

Kissell is an inspiration but he’s also an incredibly grounded young man. He wants to wrestle with his siblings — and sometimes does, even though he knows he shouldn’t and often pays the price. He fantasizes about a career in video games. He’s a normal boy trapped in a painful skin who’s full of good will for others.

One day he reached even 60,000 views, and his father teased him that it was his “one day of fame.” Kissell continues to pray the Divine Mercy Chaplet as he feels called to do it and says he wants to make people happy. He’s a truly remarkable teen who would be a great inspiration and example for both adults and children alike.

If you want to join Kissell for the Divine Mercy chaplet, visit his Facebook page where you can join him daily at 3 p.m. Eastern Time.

Read more:
This woman seeks to have 20 billion Divine Mercy Chaplets prayed for the dying in 2020