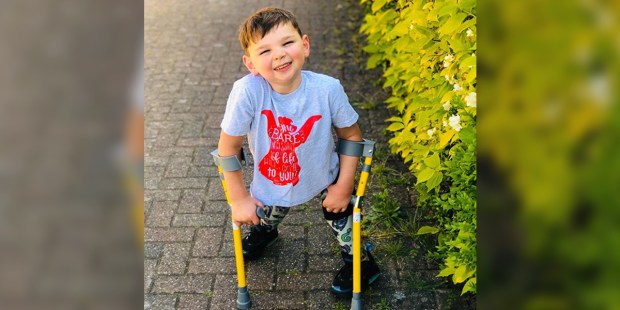 Inspired by the 100-year-old Captain Tom Moore, Tony Hudgell is determined to show his gratitude to those who saved his life.

When Tony Hudgell was 41 days old he suffered such horrific abuse at the hands of his biological parents that he ended up on life support and eventually had to have his legs amputated. Thankfully last year the little boy had prosthetic limbs fitted and is learning to walk with the help of crutches. So now the youngster from England is putting his newfound mobility to a good cause.

Inspired by the now-centenarian Captain Tom Moore, who recently raised more than $42 million for the British health service by walking around his garden, Tony set himself the challenge of walking just over 6 miles by the end of June. “He saw Captain Tom walking with his frame in the garden, and he said ‘I could do that,'” shared his adoptive mom, Paula Hudgell, with the BBC.

He had hoped to raise £500 on his JustGiving page (approximately $637) for Evelina London Children’s Hospital that had helped save his life, yet the little boy has managed to raise over $485,000.

Tony’s own challenges could so easily have set him back in life but thanks to inspiring figures, such as the soon-to-be Sir Captain Tom Moore, and his own gratitude to those who helped him in his time of need, the schoolboy is proving to be an inspiration himself.

We have been overwhelmed to see the support for Tony as he takes on his own 10K to support our hospital.

Words cannot express our gratitude and admiration for this incredibly brave boy.

Thank you so much @paula_hudgell.❤️

Read more:
14 Celebrities whose acts of charity are changing lives