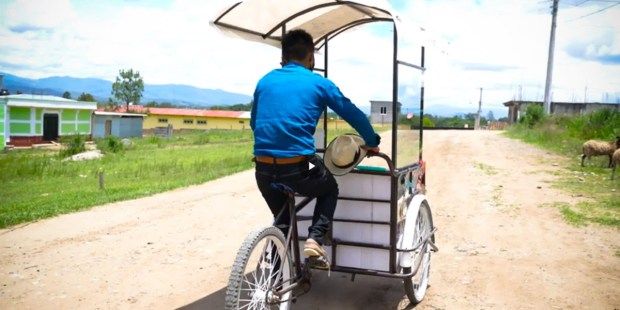 This incredible young man is determined to help his students get an education, even under adverse circumstances.

Gerardo Ixcoy is a 27-year-old teacher and is proudly Guatemalan. He teaches in indigenous territory, where students have no access to mobile apps or computers. In fact, just having electricity there is something of a luxury.

What could he do for those indigenous children who have not been incorporated into the digital age, but who have been marginalized instead, as has happened too often in the region where Gerardo lives?

Gerardo’s school is the vast cornfields in the Mayan region of Santa Cruz de Quiché. His students are young indigenous children in the sixth year of primary school.

He felt that he had to teach them. There had to be an alternative to distance education. After all, why should indigenous children be excluded from having the education they need? Education is a universal right, after all. But what was the solution?

A mobile classroom, made from an adult tricycle: three wheels, a white board, a solar panel … Made with ingenuity and creativity, but above all, love for the underprivileged. His story was covered by Coca-Cola Journey.

Education at the distance of a broomstick

In mid-March, when the pandemic was picking up speed and Guatemalan authorities began closing schools to prevent the spread of the coronavirus, Gerardo raided his savings and bought himself a secondhand tricycle cart.

Once he had the tricycle, the next step was to adapt it into a classroom on wheels. He put a roof with a solar panel on it, along with a plexiglass screen to avoid contagion, and he mounted a whiteboard on it so he could explain to the students the basics of primary education: math with fractions, the indigenous language of their ancestors, and the more universal national language of Spanish.

The purpose of the solar panel is to provide constant power to a small loudspeaker so he can teach from a distance. It’s a matter of respecting the healthy distance required to be safe from the virus. He, the teacher, stays outside, and the student participates from his or her house. Gerardo carries a broomstick to measure a safe distance between himself and his students, even though he’s outdoors. Better safe than sorry!

Read more:
Teacher turns to Twitter to ask for size 15 shoes for a student

Gerardo is a young man who, since his childhood, has been recognized for his vocation to teach. In fact, his classmates nicknamed him “Lalito 10″—which we could translate roughly as “Gerry A+”—due to his great grades in school. In fact, his mobile classroom bears the name “Profe.” (Teacher) “Lalito 10.”

With that enthusiasm for education that has always characterized him, he tries to visit his students at least twice a week, pedaling in his classroom-cycle.

Illiteracy in the indigenous area where teacher “Lalito 10” teaches is at about 42%. The cell phones of the people who live there aren’t smartphones and don’t have the possibility of downloading applications for online education, virtual classes, or connection via apps like Zoom. Parents don’t have the money to buy data packages.

None of this has been an obstacle for Gerardo Ixcoy. The children he serves say that, although he visits them for only a few hours a week, they look forward to it.

They appreciate his visits, not only because it breaks the monotony of isolation, but also because they know he has limited time he can devote to them so must take advantage of it to learn.

On the side that the children who take classes with him see, the classroom-cycle of “Maestro Lalito 10” has a painted hand with some happy emojis, where one can read: “Greetings without hand contact … to avoid contagion.”

It’s a lesson in being close in the right way. Gerardo is an example of a great teacher, a modern-day hero determined to help the children in his care get an education, even under the most adverse of circumstances.