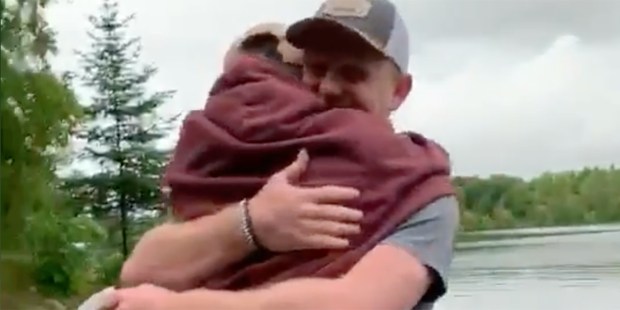 This is a beautiful story of love between brothers, a story that teaches us to accept others just as they are, appreciating their authenticity and beautiful uniqueness. It’s the story of Will and Henry Joe Claussen.

Will is going to be married in less than a year, and he and his bride-to-be, Alyssa “AJ” Johns, decided to ask Will’s brother Henry, who has Down syndrome, to be his best man. As ABC reports, Will called it a “bro-posal.”

Will and Alyssa decided to make the request a special surprise for Henry, by burying a written note in a bottle at the edge of a lakefront beach in the yard of their home in Minnesota. Watch the video, and you’ll find it impossible not to smile, or maybe even shed a tear or two.

The note read, “Henry Joe, you are already the BEST bro, and my very BEST frand [sic], so will you please say yes and be my BEST man? Love, Will.”

Will knew his brother would be happy to be asked. Henry Joe is a very joyful and enthusiastic person, so they wanted to record the moment of his reaction for the entire family. It was a good idea!

As soon as Henry Joe read and grasped the question, he jumped into his brother’s arms. Seconds later, Buddy, their golden retriever, comes running onto, the scene attracted by the happy voices. It’s a moving moment for those present and for those who watch the video, which they generously shared on social networks, where it has garnered nearly 100,000 views and reactions.

Congratulations to the happy couple, and to their best man (he said “yes”)!

Read more:
This woman with Down syndrome is running for public office