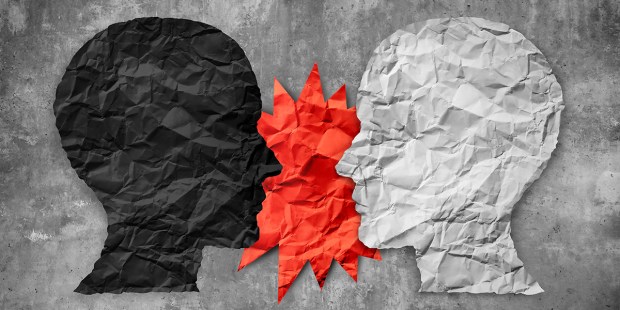 Conscience is not a flight from accountability.

That collision of poor grammar and wicked wit came from the author Ring Lardner 100 years ago. It’s been requoted and reprinted countless times. Why bring it up here and now? Well, in America, the election season has already been set to boiling. While people are taking sides along the political spectrum, it’s not uncommon to see Catholics take sides, point fingers, make accusations, and agitate for advantage—just like everybody else.

Much ink and bandwidth have been deployed as Catholics seek to justify or invalidate this or that position, or exalt or condemn this or that political cause. This isn’t surprising. What is less surprising and therefore more disappointing is a tactic frequently used by Catholics engaged in political discourse. Faced with such questions as, “How can you as a Catholic support X, Y, or Z? How can you as a Catholic not condemn A, B, or C?” many Catholics try to shut down the exchange with this maneuver: “Because conscience!” Or, as Ring Larder would say, “Shut up,” he explained.

Do you see what’s being done here? “Conscience” is being presented as an “Argument-Free Zone,” ringed off with signs that read, “NO ACCOUNTABILITY ALLOWED—BECAUSE CONSCIENCE!” But that’s not how conscience works.

(I’ve already written via Aleteia about the nuts and bolts of how conscience works HERE, HERE, HERE, and HERE.) What concerns me nowadays, watching the political season heating up and now boiling over, is that some Catholics are invoking a faulty understanding of conscience that facilitates a flight from accountability.

Before we go on, it may be useful to mark out the distinction between accountability and responsibility. In ordinary conversation, we use those words interchangeably. That’s unfortunate, because the distinction between them is worth maintaining, a claim that will become more clear if we link them with the word “attributability.” Here’s how it works: Responsibility allows me to say, “I did it.” I am the responsible source of my actions. If I pick your pocket, I cannot honestly say, “I wonder why the fingers of that hand did that?” No—I did it. I chose to use my hand to take your wallet. I am responsible for that theft.

The bridge between you and me is attributability. That allows you to identify me as the responsible source of my action—you attribute my action to me. Because you can do that, you can hold me accountable for my action. After you attribute the act to me as its responsible source, you may demand of me an account of my action. “Why did you do it?” Depending upon my answer, you might assign to me a sanction—that, is, praise or blame. There is no moral action, there can be no moral discourse, unless we get right responsibility and accountability, linked by attributability.

So understood, we can see that the misapplication of conscience (i.e., “Don’t ask me why—because conscience!”) is destructive of civilized conversation. It’s a flight from accountability. An illustration: When a Catholic tells me that he gladly supports this or that cause, and loudly denounces some other cause, I simply ask, “Why? How did you come to that conclusion? Please show me your evidence for your position. How long did your research take? Please show me the steps you took that justify your choice to hold your position so firmly.”

I almost never get what I asked for. More and more these days, I get some form of “Because conscience!” which we can now see is a briefer variation of “’Shut up,’ he explained.” Some folks might try to answer, usually beginning with, “I just feel that …” My inclination is to say, “Yes, I believe you. In this case, you just feel. But moral maturity requires more than just feeling. It requires a wise and prudent coordination of head and heart together, both guided and formed by the truth that Christ entrusted to his Church. Such a well-formed conscience will exemplify the standard we find in Scripture: “Always be ready to make your defense to anyone who demands from you an accounting for the hope that is in you.” (1 Peter 3:15)

Yes, it takes a lot of time and effort to have such an informed and well-formed conscience. It’s worth the effort because a sound conscience is a moral compass that can guide us to goodness in this life and glory in the next. If we know how to use it well, we can teach others to use the compass of conscience. In that case, invoking conscience, rather than ending conversations, can begin them. Let’s learn how to use conscience as a guide and an invitation, rather than an excuse, a flight from accountability.

When I write next, I’ll consider neglected aspects of morality. Until then, let’s keep each other in prayer.