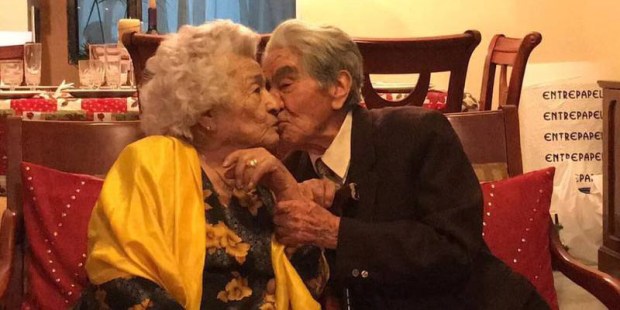 Their parents tried to stop them from getting married, but nearly 80 years later, they’re still in love.

They are 110 and 104 years old and have been married for almost 80 years. Julio Cesar Mora Tapia and Waldramina Maclovia Quinteros Reyes hold a record: They are the married couple with the greatest combined age in the world — almost 215 years combined, according to the Guinness World Records website.

These two Ecuadorian teachers are living proof that love can grow more tender each day, capable of overcoming difficulties and enjoying the little moments of happiness that life offers.

They met eight decades ago, when Waldramina went to visit her sister during a school vacation. Julio Cesar was her brother-in-law’s neighbor and cousin. The meeting was simple, and they fell in love after establishing a beautiful friendship. Friendship, they say, is the driving force of their love, because first they became friends and then started dating. It took them seven years to get married.

Waldramina discovered in Julio Cesar a loving man whose poetry won her heart. Julio, meanwhile, was captivated by Waldramina’s goodness and beauty, and the two of them also shared hobbies and long hours of conversation.

On February 7, 1941, they were married at the “The Church of Bethlehem” in Quito. They had a secret celebration with only a few guests, including their godparents and closest friends, since their families did not approve of the marriage.

As teachers, they consider education to be vital, because, they told Guinness World Records, “it allowed us to chart a course for all generations of our great family.” For them, “family unity under the rules of love, mutual respect, and an adequate education based on family values are the keys to living together healthily.” The website quotes them as saying,

“”For us, Julio César and Waldramina, it is a great honor and a reason for healthy pride to have a title from Guinness World Records. It’s true that at this time it’s difficult because we’re overwhelmed by a pandemic that affects everyone and we still do not have a solution, but the first step is for us to be disciplined, to respect and love each other’s lives. It’s also a reminder to pass on to our generations the example of being worthy to continue on.”

Their marriage has already outlived many people. However long they have left, may it be blessed, and may their example inspire younger generations to persevere in marriage, knowing that true, lasting love and commitment is indeed possible.

Read more:
Married for nearly 62 years, this couple still writes to each other every day when they’re apart