A pilgrimage in the footsteps of St. Clare

This is the third of a three-part series, “In the Footsteps of Sts. Francis and Clare.”

Each year, countless pilgrims come to Assisi to walk in the footsteps of St. Francis and learn about one of the greatest saints in the Catholic Church. However, many are unaware of the parallel journey undertaken by Assisi’s other great saint: St. Clare. Her story is remarkable in its own right.

St. Clare’s journey begins in the upper area of Assisi at the Cathedral of San Rufino. To the left of the cathedral is a small chapel marking the site where Clare’s paternal home once stood. In this area, though she grew up in a privileged household, she dedicated her days to prayer, fasting, and giving her food to the poor. When she was 18 years old, Clare made her fateful decision. At midnight after Palm Sunday, 1212, she fled the wealth and privileges of her father’s noble castle to follow Francis in poverty.

Walk downhill following the directional signs to St. Clare/Santa Chiara. After descending numerous staircases, you will see the Basilica of St. Clare on the left. When Clare passed this spot that night, there was a small church dedicated to St. George. The right side of the actual basilica was part of the Church of San Giorgio (St. George). After Clare died, it was incorporated into the basilica built as her tomb.

Now follow signs to Moiano. After passing the Moiano parking lot, you will come to the Moiano city gate. This is likely the city gate through which Clare left the city walls of Assisi. The city walls provided more than just security, they contained the identity of the people. By leaving these city walls, she was renouncing the identity associated with her noble status in order to embrace a spiritual one. 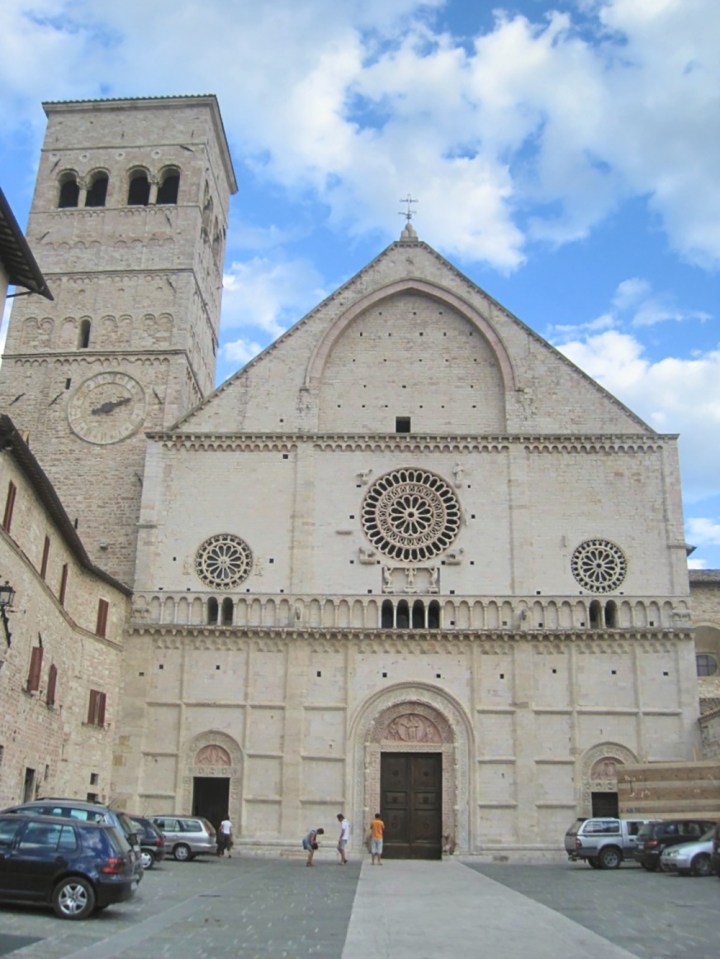 At the bottom of the hill, turn right. Then follow the red brick sidewalk all the way to the Basilica of Santa Maria degli Angeli (St. Mary of the Angels). Inside the basilica, directly beneath the dome, is the little church of the Portiuncula. Inside this church, Francis cut Clare’s hair, giving her the monastic tonsure. She immediately left for a Benedictine monastery for women. In Clare’s day the walk would have been mostly forested on rocky dirt paths. Today, it passes initially through the busy residential neighborhood of Santa Maria degli Angeli and eventually along a quiet walking path flanking the Tescio River.

At the end of the trail, on the other side of the road, is the church of San Paolo delle Abbadesse, Today it is part of a cemetery, while in Clare’s era it was the church of an important monastery for noble women. It was likely a strategic decision to place her there. When the knights in Clare’s family came to take her away, she simply had to remove her veil and show them her tonsure. To remove a consecrated nun by force would have led to excommunication. Clare stayed with the Benedictine nuns for about 10 days,

Francis and the brothers then accompanied St. Clare to another religious community. Starting from Assisi’s city gate of Porta Nuova, on Via San Benedetto past Assisi’s stadium, you will find a wooden hand-painted sign with an arrow pointing to Sant’Angelo in Panzo.

It is not known why Clare came to stay with this religious community, who were perhaps Benedictines or part of a penitential movement. Clare’s sister, Agnes, joined her here in Panzo. After she arrived, the knights of her family came for her. This time, they tried dragging Agnes away violently. Clare prayed and her sister’s body became so heavy they could not lift her. This was St. Clare’s first miracle. After this episode, Francis accompanied the two sisters to their final home: San Damiano.

From Assisi’s Porta Nuova city gate, follow signs downhill to the Santuario di San Damiano. The Sanctuary of San Damiano is the single most important site related to the life of St. Clare. Inside visitors can see the bare wooden choir stalls where Clare and her sisters prayed. At the top of the stairs is the oratory where Clare prayed when she was too sick to go down to the choir. In the corner of the dormitory is a cross marking the spot where Clare died. There is a wooden door here commemorating the moment when St. Clare held up a pyx containing the Eucharist to repel Saracen invaders.

In San Damiano, Clare embraced the new life she was called to. She left all the worldly privileges for only one, which she referred to as “the highest privilege of Poverty.”

Bret’s recent book, Following Francis and Clare expands on this walk, plus a dozen others in and around Assisi.

Read more:
A pilgrimage in the footsteps of St. Francis in Assisi

Read more:
A pilgrimage in the footsteps of St. Francis in the Spoleto Valley