The Middle Ages depicted Joseph as a safeguard of the purity of the Church and a protector against attacks of self-interested sovereigns.

St. Joseph, whose voice is never heard in the four gospel accounts, was often overlooked during the first centuries of Christian art. In their efforts to underscore Jesus’ divine paternity, Christian artists downplayed Joseph’s presence in scenes of the Nativity and infancy narratives. St. Joseph’s discretion served the Church well in the first millennium of the faith, as Christians battled Arian and Gnostic heresies while striving to bring the Gospel to new peoples. In a world unsettled by the fall of the Roman Empire, Joseph made rare appearances, as the West scrambled to reconstitute a society and spread the faith.

St. Joseph emerges in the Age of Chivalry

The Middle Ages saw the Church flourish, owning lands and governing people, as the clergy grew into what would become the First Estate. With wealth and power, however, came corruption, plunging the 9th-century Church into a nadir of crime, scandal, and interference by temporal powers. Who would safeguard the purity of the Church and protect her from the attacks of self-interested sovereigns? St. Joseph. The Age of Chivalry saw Joseph ride in like a knight, ready to serve and to protect.

The nobility of the Old Testament Joseph

Necessary reforms were spearheaded by Pope Gregory VII in the 11th century, with St. Bernard of Clairvaux leading the charge. The Mellifluous Doctor preached on the importance of St. Joseph, “Husband of Mary,” dismissing the image of a doddering old man put forth by the apocryphal Protoevangelium of James, and proposing a thoughtful hero of self-mastery. St. Bernard presented a noble Joseph, comparing him to his Old Testament counterpart, the patriarch and son of Jacob.

St. Bernard praised the continence of both men. “The first was faithful to his master, and treated his wife with honor; the second, too, was the most chaste guardian of his bride,” he wrote, indicating that Joseph’s chastity was fruit of self-restraint, not infirmity of age. Furthermore, noted Bernard, the two Josephs were dreamers. Joseph of Egypt “was given the understanding and interpretation of dreams” while Jesus’ foster father enjoyed “the knowledge of, and participation in, the heavenly mysteries.” Joseph’s privileged communications, in the form of his four dreams, became a new focus in art.

Eastern art provided inspiration. A precious 11th-century ivory relief, carved in Constantinople and today kept in the Vatican museums, again separates the contemplative Joseph from the charming scene. As a missal cover, this object was easily transported and served to stoke the imaginations of Western artists. 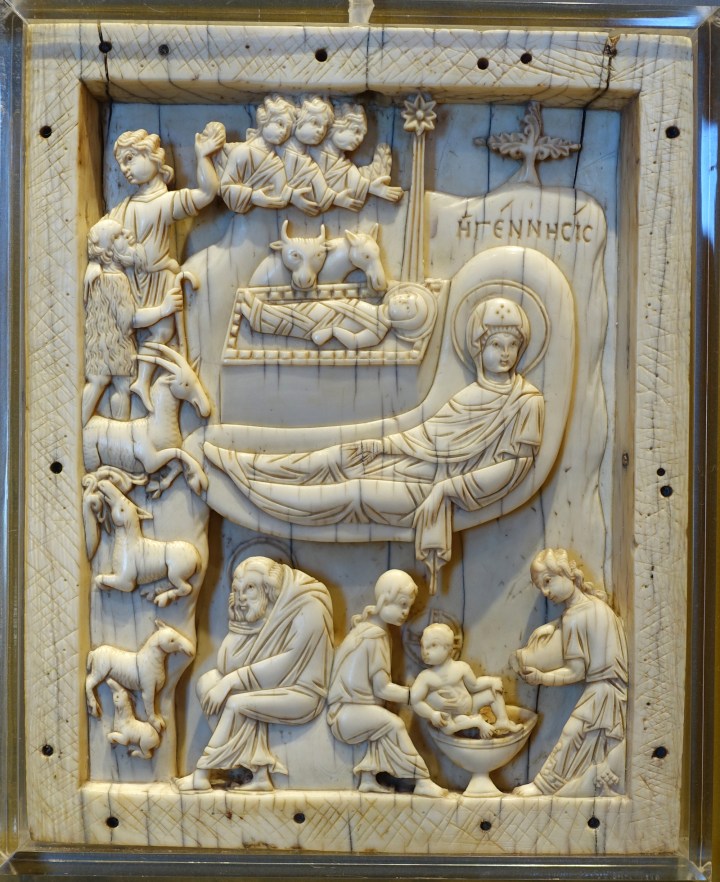 The “new” Joseph of Chartres

A stained-glass window of the Incarnation in Chartres Cathedral, from 1194-1260, reveals the “new” Joseph. Curtains open to focus attention on Jesus, raised up on a columned altar in his swaddling clothes, with the ox and ass peering at him. Below, Mary rests on a bed gesturing up towards her child, while a younger Joseph, his cheek resting on his hand, sleeps. Colors play an important role in this work. The halos of Christ and Mary are rendered in the famous Chartres blue, a deep, mesmerizing cobalt, while Joseph’s is a lighter turquoise. Jesus’ swaddling clothes, on the other hand, are a mix of the two colors: Mary bore Him through the power of the Holy Spirit, but Joseph gave him a family name, genealogy, and an identity in the society. Mary and Joseph are depicted across from each other in this work, both seated below Christ, at the foot of the altar, as it were. It is worth noting the fine details of intricately inlaid wood on Mary’s bed, a flash of virtuosity for the glassmakers, but also a homage to Joseph’s activity and artisanship.

Read more:
St. Joseph: His life, his miracles and his legacy

The new Josephine iconography was also transmitted through illustrated manuscripts. An exquisite leaf from a 14th-century Book of Hours shows Mary cradling the Child while Joseph sleeps next to them.

St. Joseph as protector of the Church

Medieval writers also emphasized Joseph’s active life along with his meditative nature, highlighting the humility of this descendant of kings who did not scorn manual work to support his family. St. Bernard invited his listeners to visualize Joseph, permitted by God “to carry Him in His arms, rear Him, embrace Him, kiss Him, nourish and watch over Him.”

The duality of Joseph’s ministry was beautifully expressed by the Sienese artist Duccio in his 1311 panel of the Flight to Egypt. Joseph is seen twice in this work, first on the far left, sleeping as an angel appears to warn him to “take the child and his mother and go into Egypt” (Mt2:13). Immediately afterward, Joseph appears again having leapt into action to protect his family. With his gesticulating hands, he seems to be explaining to Mary the reasons for the hurried departure.

St. Joseph, who shone during the tumult of Herod’s rage by leading his family to safety, revealed himself as an ideal guide to accompany the Church out of the chaos and corruption of the end of the first millennium.

Read the rest of our series of article by the art historian Elizabeth Lev on St. Joseph in art: