Humorous cameos of St. Joseph served the purpose of helping the faithful enter into the mystery of Jesus’ human experience.

St. Joseph may have lingered in the background of Christian art for the first millennium of our era, but the Franciscans changed all that, launching a Josephine juggernaut that would propel art into a new age. Founded in the 13th century, the Franciscans not only championed the Immaculate Conception of the Virgin, and emphasized Christ’s human experience from creche to cross, but they also brought about new and surprising images of St Joseph.

St. Bonaventure (1221-1274), the seventh Minister General of the Order of Friars Minor, turned St. Joseph into a household word — preaching, writing and promoting the saint’s role in salvation history as “second only to Mary.” Bonaventure praised Joseph’s evangelical humility, holding him up as an example for manual laborers, those who, while not particularly instructed, could “see with the eyes of faith.”

A comic and very human figure

Devotion to Joseph was accelerated by the discovery of a relic, his hosen or “trousers,” which appeared in Aachen Cathedral in 1238. A tradition held that Joseph had given his own tattered garments to be used as swaddling clothes for Christ. The revival of the infancy narratives of the apocryphal Pseudo-Matthew alongside Joseph’s old hosen led some to depict him as a kind of scriptural comic relief. A few Northern artists portrayed Joseph as a figure of fun: in his old clothes, stoking a fire, looking for midwives, drying diapers, fussing over the Christ’s child’s immediate human needs.

A charming Netherlandish Nativity painted during the 14th century for Philip the Bold shows Jesus cared for by his nursemaid while Mary rests. In the lower left corner, Joseph rends his sock to make a covering for the naked infant. While the scene brings a smile, his extended unshod foot is reminiscent of the penitential pilgrims who traveled barefoot and humble to holy sites.

Meanwhile in Prague, another altarpiece depicted Joseph huddled over a basin, helping a midwife to prepare a bath for the newborn Christ, while Mary nestles with her Son on a rose-covered dais. The pink of Joseph’s cloak matches the Virgin’s drapery, forestalling the possibility of being upstaged by the donor, clad in royal blue as he offers a model of the chapel he has endowed. Joseph, by contrast, a descendant of kings, works quietly with the servants, a model of humility.

Conrad von Soest’s startling panel produced in 1403 places St. Joseph on all fours, blowing on the fire as he cooks a simple repast. Mary and Jesus cuddle, surrounded by fiery red seraphs, while Joseph, surrounded by his wooden bowl, spoon, and stool, is prostrate before his Son.

St. Bernardino of Siena would protest what he saw as disrespectful depictions, but these humorous cameos of St. Joseph served the purpose of helping the faithful enter into the mystery of Jesus’ human experience. As St. Francis was delighted to be a “fool for Christ,” mocked for his radical devotion to poverty and his simple joy in faith, so Joseph gracefully took on the role of comic sidekick, a reminder that faith is not the realm of solely the erudite. Half a millennium later, St. Paul VI wrote: “St. Joseph is the model of those humble ones that Christianity raises up to great destinies; he is the proof that in order to be a good and genuine follower of Christ, there is no need of great things — it is enough to have the common, simple and human virtues, but they need to be true and authentic.” 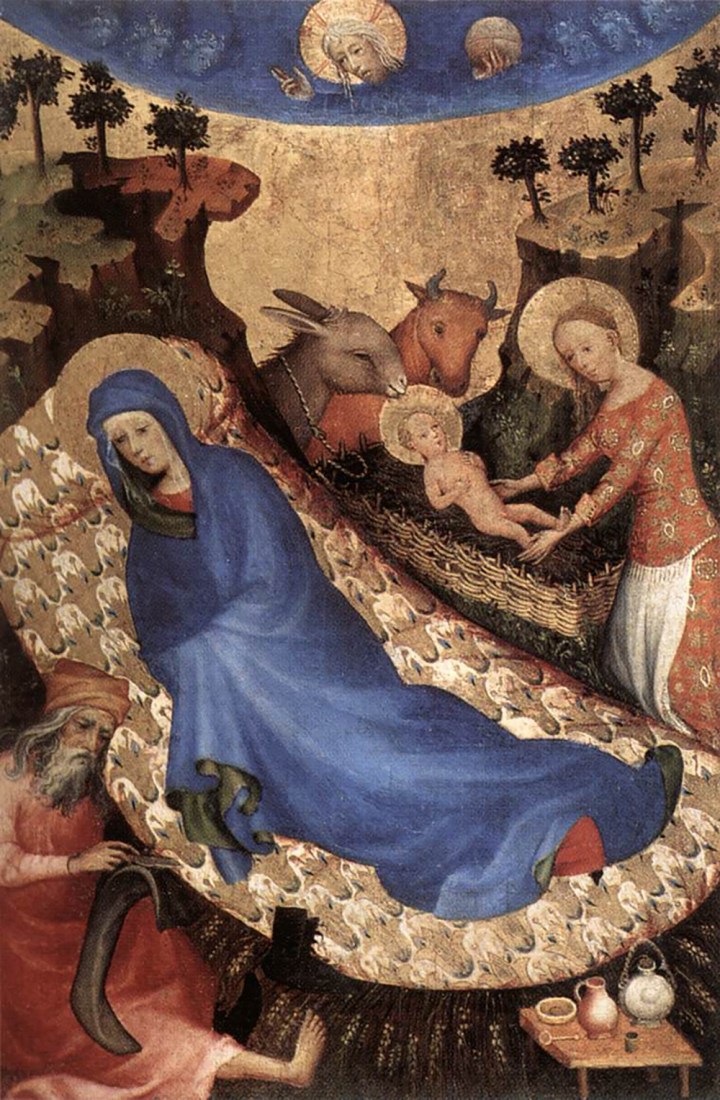 Italian artists found a more dignified manner of depicting Joseph’s witness to Christ’s humanity. In 1260 Nicola Pisano carved a revolutionary Nativity on the pulpit of the Pisa cathedral. Numerous scenes are crowded together in a style derived from ancient sarcophagi: the Annunciation protrudes from the upper left, while the bulk of the space is filled with the birth of Christ. Jesus appears twice, once next to his mother swaddled in a coffin-like manger and then again below receiving a bath. Joseph, seated in the corner, placed amid mundane activities, gazes heavenward, absorbed in the mystery of the Incarnation. Florentine painter Giotto, the Franciscan style guru par excellence, built on Pisano’s model, with the added dazzle of color. In the Lower Basilica of St, Francis of Assisi, Giotto repurposed a double Nativity, placing Mary and Christ above in a little hut attended by angels, while below, a second baby Jesus is bathed by midwives. Joseph again sits on the lower level, an example of what St. Bonaventure would describe as “divine piety” or reverence. Watching the bathing, providing the swaddling, finding the shelter, Joseph became an authoritative witness and servant to the human nature of Christ.

The Franciscan devotion to St. Joseph found another contemporary outlet as the papacy struggled with crusades, temporal power plays, heretical sects, and confusion among the faithful: and thus he became the role model for the Roman pontiff. Peter John Olivi, a Franciscan student of St. Bonaventure, declared that “Joseph represents God the Father or Christ because he is the spouse of the Church,” then drew another parallel with the Church, which, “like Mary, conceived the evangelical Word through the spirit of Christ,” making Joseph also “the image of the Roman pontiffs, installed as guardians of the Church.”

After 1308, when the papacy abandoned Rome for Avignon, and then after their schismatic return in 1378, Joseph’s iconography changed again. Jean Gerson, Chancellor of the University of Paris, wrote an epic poem — the Josephina — in his honor. He pleaded with the popes to be to the Church as Joseph was to Mary: quiet, obedient and faithful to the divine will, exhorting, “No differently are you, father, given to the Church as a betrothed in Christ’s place as a dutiful shepherd.” Joseph was thus transformed into the alter ego of St. Peter. Giotto was again first on the scene to codify this new image. In his frescoes of the Scrovegni chapel, Joseph’s white hair and short curly beard mimic Peter’s Imperial Roman style, and his blue and yellow robes emulate the color scheme of the servant of the servants of God.

This iconography was so successful that it was still used over 100 years later by Pietro Perugino in the Marriage of the Virgin in Perugia and the Delivery of the Keys in the Sistine chapel. Here, Joseph even wears Peter’s tonsure, the outward sign of the clerical state.

Perugino was selected as the lead painter in the Sistine chapel murals by Pope Sixtus IV (a Franciscan), who left the world more than just the lovely frescoes in the world’s most famous chapel. At long last, Sixtus also gave St. Joseph his own feast day, March 19, still celebrated in Italy as Father’s Day.

Read more:
St. Joseph: His life, his miracles and his legacy