Thousands to march on Washington in solidarity with persecuted Christians

MARCH FOR THE MARTYRS

The organizers of the September 25 March for the Martyrs hope to raise awareness of the plight of the most persecuted religious group in the world.

Gia Chacón, the founder of the non-profit organization For the Martyrs, is on a mission to spread the word that the Christians are dying for their faith in unprecedented numbers.

To that end she is organizing a “March for the Martyrs” to be held in Washington, DC, on September 25.

“We believe knowledge inspires action— the more people who are aware of the crisis of Christian persecution, the more that can be done to aid the suffering faithful,” she told Aleteia.

That knowledge is based on what Chacón has witnessed in her travels to the world’s most dangerous places to be a Christian, from East Africa to the Middle East.

It’s also founded in the work that humanitarian organizations have done to document persecution and violations of religious freedom around the world.

According to a recent report from Aid to the Church in Need, almost 340 million Christians — that’s one in eight — suffer some form of persecution, ranging in severity from harassment to murder.

Christian martyrdom is far from a thing of the past. The humanitarian organization Open Doors reports that more than 4,000 Christians were murdered for their faith in 2018.

In 2017, at the age of 20, Chacón was working in the cosmetics industry when she felt a need to find a greater purpose in her life. She took some time off and joined her grandmother, Michelle Corral, in Egypt where she was engaged in humanitarian and missionary work.

John Burger reported in Aleteia that while living among Egyptian Christians, Chacón was inspired to devote her life to helping persecuted Christians:

“It was in Egypt, traveling with my grandmother, that I experienced the face of the persecuted Church for the first time. I realized that there are Christians suffering for their faith, and that these were not just the older generation, but people my age were willing to risk everything for their faith, willing to risk their lives to go to church, to serve Christ and live their lives for the Gospel,” said Chacón.

Jonathan Roumie from The Chosen marches

On September 20, the first March for the Martyrs was held in Long Beach, California. Hundreds of people from many Christian denominations took part, including the actor Jonathan Roumie, who plays Jesus in the popular series The Chosen.

Roumie addressed the marchers, recalling America’s founding and his own family’s experience as Christians in Egypt.

“The fact that we can be here praising Jesus’ name together without apology deserves a round of applause. God called you here to celebrate with us, to march with us,” said Roumie.

View the slideshow below for photos of the first-ever March for the Martyrs: 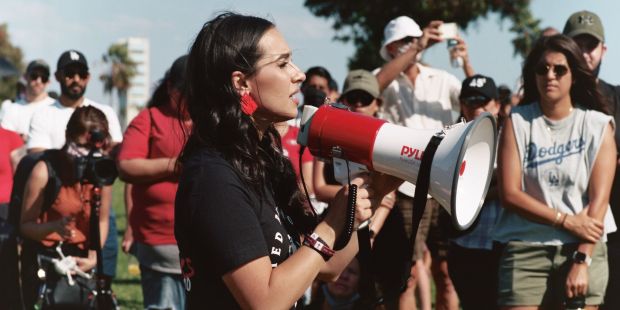 Register for the Washington, DC March for the Martyrs

Confirmed speakers at the Washington, DC march include podcast host Allie B. Stuckey, Bob Fu from ChineAid, Toufic Baaklini from In Defense of Christians, and Fr. Benedict Kiely from Nasarean.org.

The DC March for the Martyrs on September 25 will begin at Freedom Plaza, proceed to the White House, and return to the hotel where a conference will be held in the evening. To register for the event visit https://forthemartyrs.com/register/.