Aid to the Church in Need Ireland

These altars made of boulders were once the secret worship places of Catholics, when the practice of their faith was prohibited.

As part of a campaign organized by Aid to the Church in Need (ACN), Catholic priests are celebrating Mass at a “Mass Rock,” where the Irish faithful once secretly practiced their faith when it was illegal to do so.

Mass Rocks, the clandestine churches of an age of persecution

In the 16th-18th centuries, during the period of the “Penal Laws” enforced by England, any public expression of the Catholic faith in Ireland was prohibited. Churches were closed, Catholics faced fines and imprisonment for practicing their faith, and priests were threatened with death for tending to to their flock.

In spite of the danger, Catholic priests continued to celebrate Mass, and held services in secluded outdoor locations, making use or large rocks or boulders as altars. These “Mass Rocks” are still in existence today, and since that difficult time, have served as a reminder of the hardships and the resolute faith of the Irish Catholics of the past.

With the ACN Ireland Mass Rock Campaign, these boulders are more than just a symbol or interesting historical artifact. They are once again the sacred places where, acting in the person of Christ, priests celebrate the Most Holy Sacrament of the Eucharist, where, in the words of the Catechism of the Catholic Church, “they make present again and apply, until the coming of the Lord, the unique sacrifice of the New Testament, that namely of Christ offering himself once for all a spotless victim to the Father.”

Mass is being offered at a Mass Rock at each of Ireland’s 26 Catholic dioceses for “the renewal of the faith in Ireland through the intercession of the Irish martyrs.”The Mass Rocks Campaign culminates with the Feast of the Irish Martyrs on June 20. 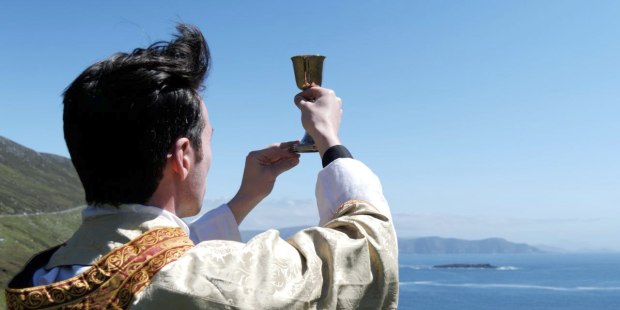 Each Mass Rock is located in a “stunningly and uniquely beautiful setting,” according to ACN.

“Whether it be in a furry glen, on a bare rugged coastline, on a still, serene mountaintop, in a grassy green field covered in fresh dew or under a canopy of pine trees, with the soothing sounds of a gentle stream nearby … each Mass Rock had one thing in common: i.e., it was found in a sacred wilderness and in a place of great serenity and closeness to God,” reads their announcement of the Mass Rock Campaign.

Aid to the Church in Need Ireland

A “unique privilege” to celebrate a Rock Mass

Monsignor Tommy Johnston reflects on his experience having celebrated one of the Mass Rock Masses, on Mass Hill, a very picturesque area in the Ox Mountains in the parish of Tubbercurry, the diocese of Achonry:

“The Mass Rock there is a huge boulder with an uneven surface offering no indication that it could possibly be used for such a sacred purpose; perhaps that is why it was chosen. It did not warrant a second glance. It was above suspicion. Its location nestled on the hillside provided a clear commanding view of the surrounding area, so, lookouts, at the first hints of danger could easily alert those gathered for Mass,” he said.

“It was a unique privilege to stand at a place made sacred by our ancestors who had stood there all those years ago giving voice to their faith in presence and prayer conscious of the ever-present danger to life and livelihood,” he reflected.

The ANC invites the faithful to join in prayer for the renewal of the faith in Ireland through the intercession of the Irish Martyrs. For more information on ACN Ireland’s Mass Rock Campaign, visit www.acnireland.org/mass-rocks.