A worker helping build Christ the Protector, a statue in Encantado, Brazil

He had to step in at the last minute to fill his sculptor father's shoes, but he says, "Christ protected us."

Markus Moura, a 41-year-old Brazilian, is the artist responsible for completing a great challenge: giving shape to what is billed as the largest statue of Jesus Christ in the world. (A somewhat debated title, as the statue of Christ the King in Swiebodzin, Poland, is arguably taller. In any case, another statue in Mexico is set to surpass it soon.)

In April 2022, after three years of construction, the principal work on the statue was finished: it’s called Christ the Protector, in Encantado, in the state of Rio Grande do Sul, Brazil.

The work in southern Brazil began in 2020. Markus had to take over the work started by his father, the sculptor Genésio Moura, who fell ill at the beginning of the project.

Indeed, the gift for sculpting in cement was passed on from father to son. Genésio was responsible for making several famous sculptures in Brazil, including some of the sculptures at one of Brazil’s most popular amusement parks, Beto Carrero World (the largest theme park in Latin America).

Father and son started working together and Markus acquired a taste for the art. His first work was a statue of Christ in Elói Mendes, Minas Gerais. “After that I started to specialize in Christ,” Moura recounts, mentioning three other statues of Jesus he created before this current project.

Christ the Protector in Encantado

For the sculptor, the Christ the Protector of Encantado was the most important of his career. The monument is 123 feet high (143 including the base) and has a 127-foot arm span.

It’s sculpted in a realistic style. The most observant visitors notice details such as the hairs of his beard, the details in his eyes, and the movements of his tunic.

“I try to give life to the sculptures, to the look. I get inspired and give form to the cement. I get my inspiration from nature. And in the case  of Cristo in Encantado, the region, the valley, the wind, and the cold inspired me a lot. All this contributed to my bringing life to this statue of Christ,” reveals the artist.

Moura’s work on this monument started with the face of Jesus, which required more than a month of exclusive dedication. The sculptor considers it the most challenging part.

“I couldn’t go wrong with his face. It had to be a serene, youthful face, looking 33 years old. So, with my father’s help, I managed. I would call him and he’d say, ‘Markus, what do you think about doing it this way or that way?’ Even from his sick bed, my father helped me. Thanks to him, Christ got this beautiful face. The people liked it very much,” says the sculptor.

“The Christ protected us”

The artist recalls that there were no accidents during the construction. “Nobody was injured, nobody ended up in the hospital. The energy during the work was very good. Christ protected us,” says Moura, who was baptized in the Seventh Day Adventist Church, but says he doesn’t follow any organized religion nowadays, although he strongly believes in God.

The statue of Christ the Protector of Encantado is bigger than the Christ the Redeemer of Rio de Janeiro. But the sculptor says that there’s no way to truly compare the two monuments:

They are totally different works. The Christ of Rio de Janeiro is from the 1930s, and it’s one of the Seven Wonders of the World. It’s stylized, not realistic. It’s perfect! And it took nine years to be built. Our Christ took two years to be built. There’s no comparison, each has its own beauty.”

The work of the Christ of Encantado made the name of sculptor Markus Moura known worldwide. As a result, he has received invitations to work in several countries. But for him, the most important thing is what his work will mean to people.

“I hope that this Christ can bring goodness, that people can look at this Christ and remember God, a powerful God, regardless of religion.”

After the work was finished, the sculptor donated the tools he used in the work (a small knife, a spoon and a spatula) so that the association that manages the monument can put them in a museum or put them up for auction.

The Cristo Protector of Encantado is located in a tourist complex that has not yet been inaugurated. However, it is already possible to visit the monument.

Click on the slideshow below and see what the largest statue of Christ in the world looks like. 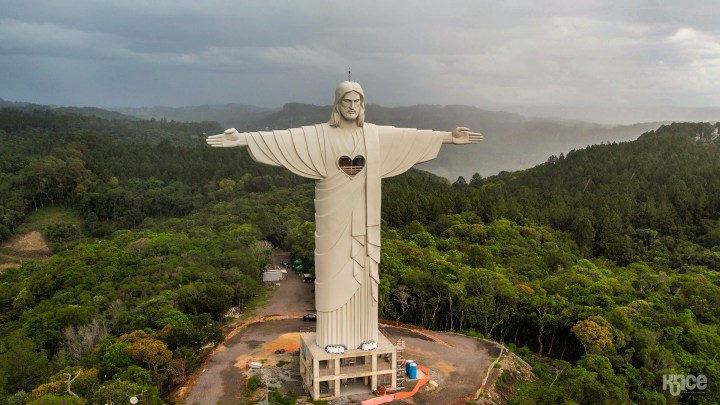