ACN's #RedWednesday campaign draws participation from Catholic communities all over the world.

This November 23, churches across the world are framed in red light to raise awareness of the persecution of Christians taking place in the world today. The #RedWednesday initiative is organized by Aid to the Church in Need (ACN), which recently released a report that found Christian persecution is increasing in 75% of the 24 countries they examined.

The report, Persecuted and Forgotten? A Report on Christians Oppressed for Their Faith 2020-22, highlighted several areas of the world where Christians face particularly harsh persecution. In the Middle East, for example, nations like Syria and Iraq have seen large portions of their Christian population flee in recent years. Meanwhile the more diverse nations, like Egypt and Pakistan, have marked a significant rise in the systematic kidnapping and sexual abuse of Christian girls.

ACN’s report went on to note that North Korea is suppressing the faith and India has marked a rise in violence against Christians. Some of the worst offenses, however, came from Nigeria, where ACN describes the treatment of Christians as “genocide.” ACN cites the murders of more than 7,600 Nigerian Christians between January 2021 and June 2022, including the Pentecost Sunday attack on a church mid-service that saw more than 40 worshipers killed.

Bishop Jude Arogundade of Ondo, who heads the diocese in which this atrocity took place, commented:

“The world is silent as attacks on Churches, their personnel and institutions have become routine. How many corpses are required to get the world’s attention?”

ACN’s #RedWednesday initiative places the Nigerian massacre and the nation’s ongoing plight of Christian persecution at the forefront of their intentions.On the ACN website, they call for the UK government in particular to take an active role in seeking justice for the Pentecost Sunday attack, as well as the return of lands occupied by terrorist entities and compensation to the victims.

Hope is the driving force behind the #RedWednesday initiative and ACN implores all Christians to stand in solidarity with our brothers and sisters in Christ around the world. They write:

“WE can Break the Silence on religious persecution. WE can be their voice, WE can shine a light on injustices and WE can be a beacon of Christ’s light and love through our families, schools, universities, groups and communities.”

Pope Francis noted the initiative this November 23, thanking in particular the Polish-speaking pilgrims for their participation.

I am grateful to you for uniting with persecuted Christians around the world these days by participating in the RedWeek initiative and praying for them in a special way at the shrine of Jasna Góra. May the Mother of God grant them full freedom and consolation in their suffering. I bless you from my heart.

According to Vatican News, nations around the world will participate in #RedWednesday. Ten churches in Australia will be lit red in the evening and the Cathedral in Canberra will hold a prayer event called The Night of Witness. In France, bells will ring from 100 churches and Paris’ Les Bernardins will hold a roundtable discussion on the topic of Christian persecution, followed by a prayer vigil.

Germany, Italy, and Brazil are also expected to participate with prayer services and guest speakers. In the UK, however, they have introduced a new event called “Taste of Home,” in which attendees will have a chance to share a meal together, with the dishes coming from countries in which Christians face the harshest persecutions.

There are bound to be a lot of photos of the events, but until those are released, take a look at the slideshow below to see how past #RedWednesday events have looked at churches around the world. 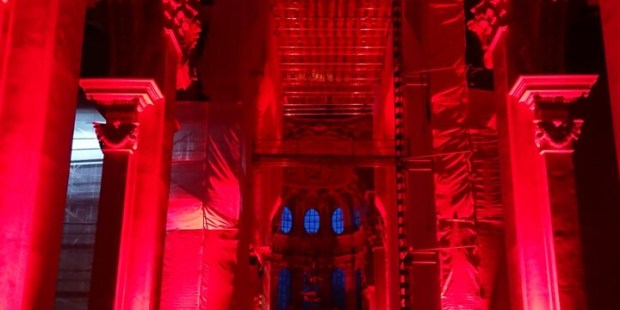 Launch the slideshow
Read more:Red Wednesday for Faith and Freedom
Read more:Aid to the Church in Need is investing in Christian students in Iraq
Tags:
CatholicCommunityPersecution of ChristiansPrayer
Support Aleteia!